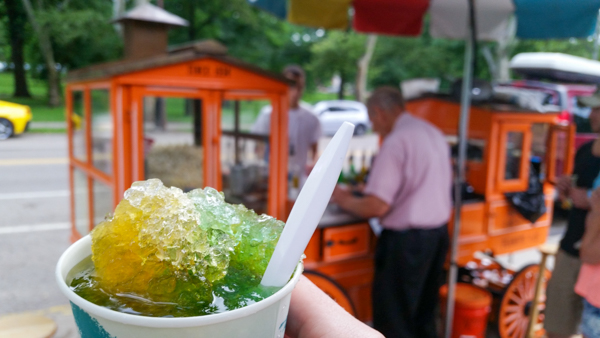 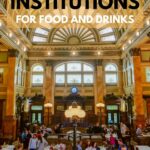 When we published our article about famous Pittsburgh foods, we got a lot of feedback and recommendations for restaurants that are famous (and rightfully so) but are not necessarily offering foods that are quintessentially Pittsburgh.

Places like The O in Oakland, Lenten fish fries, and Gus & YiaYia's were a few great suggestions. These all have die-hard followings, but we can't say that French fries, fish sandwiches, or ice balls are universally identified as being “Pittsburgh” despite their popularity.

We made the distinction in that article to only focus on foods that were either invented in Pittsburgh, adopted as regional cuisine, or offer the definitive dish in a few key categories. Simply being a popular restaurant in the city does not necessarily make the cut for what we were going for there.

Instead, we consider these popular spots to be Pittsburgh institutions. These are spots that have die-hard followings, perhaps are historical in nature, and have tried and true offerings that have stood the test of time- be it for decades or generations. While there may be some overlap on institutions that also offer famous Pittsburgh foods, we view these as being distinctly separate topics.

So in this one, we're going to share awesome Pittsburgh institutions for food and beverages! 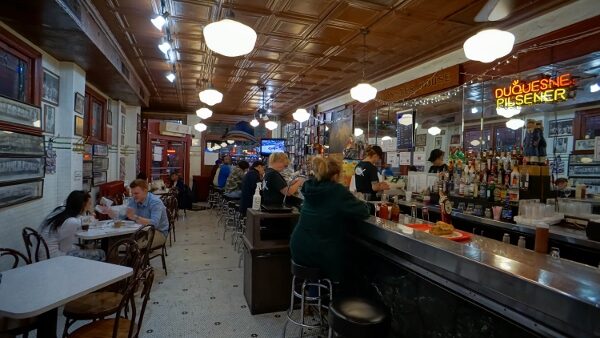 Is there a better way to start a list of Pittsburgh food institutions than with the oldest restaurant in the city? We don't know of one if there is.

The Original Oyster House has been slinging plates of seafood and drinks in Market Square since 1870 (the same year the Monongahela Incline was built). Walking into this one is like taking a trip back in time due to its historical design and nostalgic photos plastered all over the walls.

Visitors to this one should also be prepared for a battered feast as most entrees here are either fried or baked in breadcrumbs.

The Original Oyster House is located at 20 Market Square. They are cash only. 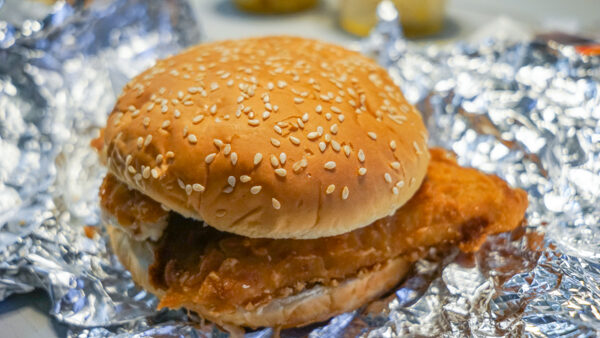 During the Lenten season, odds are good you'll find a fish fries popping up in many church basements around the country. In Pittsburgh, this one is taken to the extreme as hundreds of churches, fire halls, moose and elk's lodges, and more get into the fun with weekly fish fries.

Some of these offer simple menus of fish and fish sandwiches. Others have an array of offerings beyond fish, like local favorites pierogi and haluski, and you may even find restaurants offering high-end takes on this classic dish on select Fridays as well. But which one is the best? Well, everyone has a favorite and it really is hard to choose wrong here (although in our limited sampling, the Elk's Lodge in the North Side is a real gem!).

Suffice it to say, there is no better way to get a sense of community in Pittsburgh than checking out a fish fry on any given Friday during lent.

Looking for a listing of all available fish fries? This public map is a wonderful resource we use every season when exploring (please note we are not affiliated with this tool). 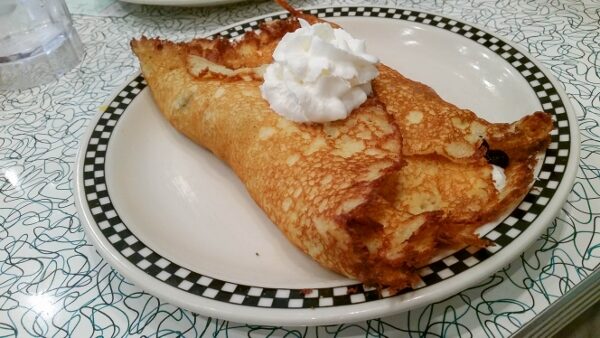 A few breakfast spots jump out to us immediately when thinking of this topic, and they are simply Pamela's, the Dor-Stop, Kelly O's, and Square Cafe. Throw out a general question about the best breakfasts in the city, and odds are good the bulk of the responses will include these!

*There are many more popular breakfast joints in Pittsburgh. We recognize these as being among the most famous/popular. 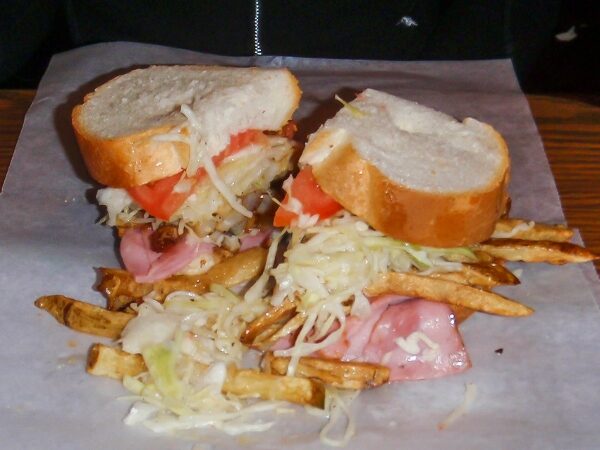 Pittsburgh's iconic sandwich shop, Primanti Brothers, first opened in the Strip District in 1933 and popularized a new style of sandwich that involved putting traditional sides of fries and coleslaw straight on the sandwich. Since then the popularity of this one has grown so much that Primanti's now has locations all over the city (even at the Pittsburgh airport), across several states, and their unique sandwich style has been imitated by many restaurant competitors as well.

But if you're going to enjoy this particular sandwich, follow this advice: go to the Strip District location, have a beer, and add a fried egg onto the top of your order. The other locations simply don't compare to the original.

Primanti Brothers' Strip District location is at 46 18th Street. If you visit this one after a night of drinking, please consider Ubering. 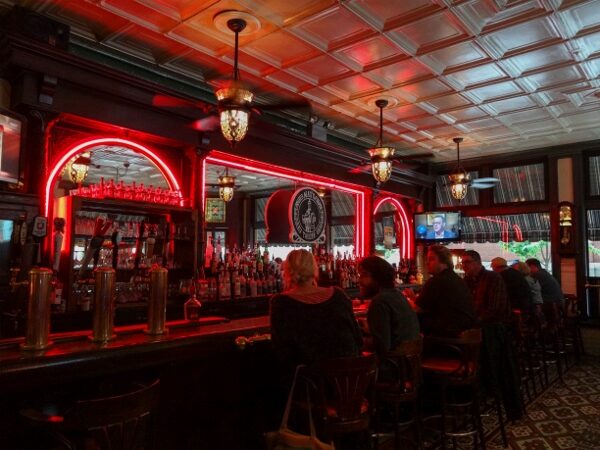 Max's Allegheny Tavern opened in Pittsburgh's North Side in 1903 and has been serving up traditional German fare ever since. From the moment you walk into this one, you'll feel like you've been transported back in time thanks to its historic decor and relatively straight-forward menu. If you need some no-frills, delicious German cuisine in your life, Max's is the place to be.

Max's Allegheny Tavern is located at 537 Suismon Street in the North Side. 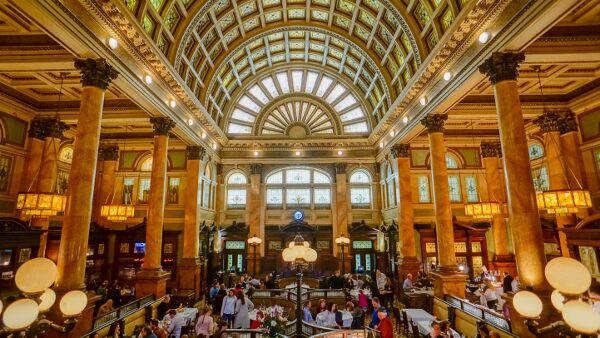 The Grand Concourse has a long and rich history. It opened in 1901 as the Pittsburgh & Lake Erie Railroad Station and was a travel hub for many decades. In the 1970s it was restored and transformed into a seafood restaurant that is also home to one of the city's most opulent brunch buffets as well. You may go to this one for the food. You may also go for the ambiance. But no matter what, you're going to get an experience that is unlike any other in the city all the same.

Much like with breakfast spots, it would be impossible (and, in fact, a disservice) to only pick one pizza place to call a local institution. Pittsburgh is in the running of having one of the highest concentrations of pizza shops per capita in the country, and we quite simply have dozens upon dozens that have been operating for decades with die-hard followings that could make them an institution.

But to us, there are a few that jump out immediately. These are Beto's, Fiori's, Mineo's, and Aiello's. Take any list of Pittsburgh pizza, and if they forgot to mention these four, well, the author will most certainly hear about it.

Beto's offers Ohio Valley Style squares where the dough and sauce are baked and cold toppings added (including cheese) whereas the others are known for their traditionally round pies. Mineo's and Aiello's are two special ones of note due to their neighboring locations in Squirrel Hill creating a built-up rivalry over the years. Which one is better? Well, we have our preference, but you'll do well to try them both to weigh in on the debate all the same!

*There are, obviously, many more popular pizza shops in Pittsburgh. But we do recognize these as being among the most famous. 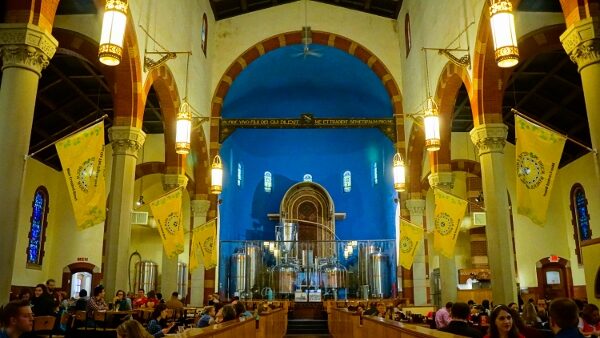 As far as Pittsburgh breweries are concerned, we have a number that could be considered local institutions. But among the oldest breweries in the city, one stands out for its unique design- Church Brew Works.

This one opened in 1996 in a converted Roman Catholic church and was one of the first in the area to repurpose a decommissioned church into a commercial space. The altar was replaced with brewing equipment, pious beer references are aplenty, and this one has an ambiance that really is unlike any other brewery in the city.

Church Brew Works is located at 3525 Liberty Avenue in Lawrenceville. 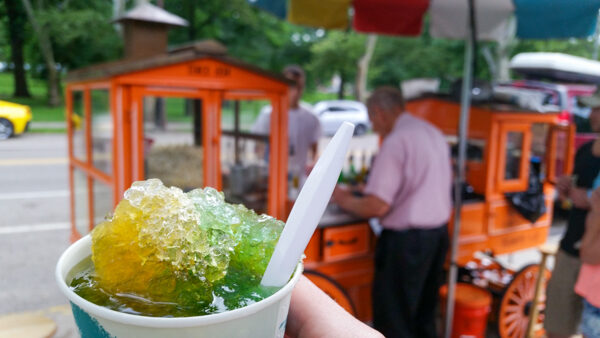 Artisanal ice creams may be all the rage these days, but during the heat of summer nothing beats a good ice ball from Gus & YiaYia's.

This local institution has been a North Side staple since 1934, or as their sign puts it, “on the North Side since your dad was a lad.” The offering is fairly simple- a giant block of ice is hand shaved upon order and topped with your choice of flavored syrups. Traditional, historic, and refreshing. Can you ask for much more out of a local institution?

Gus & YiaYia's is a seasonal cart located on West Ohio Street in North Side's West Park. Please note that the train overpass on Ridge Avenue connecting to West Ohio Street is closed to car traffic, so if you are driving in to visit this one you'll need to come in via the west. Otherwise you may have a brief walk from the closest parking areas in the Commons. 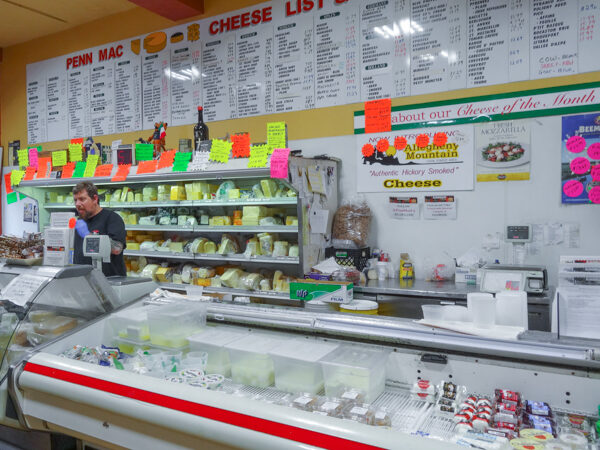 A list of Pittsburgh institutions for food would be incomplete without a mention of the Strip District. This neighborhood started out primarily as an industrial zone in the 19th century thanks to its prime location on the Allegheny River. By the early 20th century, food wholesalers also moved in to take advantage of the rail lines and proximity to the city. By the time steel collapsed in the middle of the century, most industrial producers left, leaving the food wholesalers to take over.

Since then, the Strip District has revitalized itself around this industry with many grocers, specialty stores, wholesalers, street vendors, and restaurants calling the neighborhood home. So if you are in need of some good food, whether to enjoy on the side of the road, at a restaurant, or to take home and cook with later, there really isn't anything better than heading down to the Strip for a shopping trip. As far as food neighborhoods go, it is hard to beat this iconic one in Pittsburgh.

Do you have a favorite Pittsburgh institution we have not featured? Comment below to share as we are always looking for more to add to this list. As with everything on our site, it is our goal to go everywhere in the region. Once we hit more institutions, we'll update this guide accordingly! 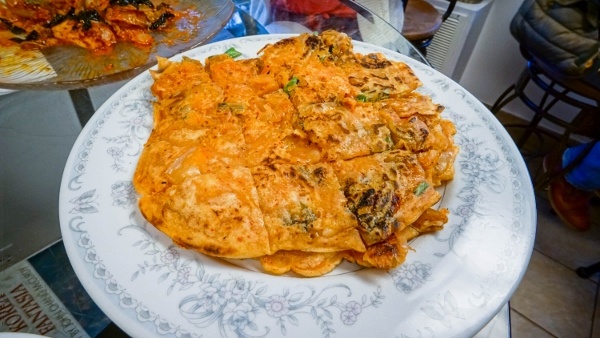 Are you in local Pittsburgh media (such as a blogger or Instagrammer)? Let’s meet up!
4826 shares