If the explosive growth of the restaurant scene and the local food movement in Pittsburgh is any indication, Pittsburgh has tons of locavores and foodies. One of the most popular annual events for such individuals is perhaps the Farm to Table conference.

This event is the perfect opportunity to network with other like-minded Pittsburghers, learn about things like canning and preserving, attend demonstrations, and browse the huge exhibit hall.

We recently had the chance to attend the conference as well as the Sunday night farm to flask tasting and left with a renewed appreciation for the local food scene.

Club Cafe in Pittsburgh's South Side is a unique performing arts venue in that it is incredibly small, yet attracts some of the best up-and-coming musicians there are.

So when the guitarist of one of our favorite bands (Chris Eldridge from the two-time Grammy nominated Punch Brothers) came into town to perform with one of his closest friends (guitarist Julian Lage- Grammy nominated for the Best Contemporary Jazz album), we bought tickets in a heart-beat.

As a beer lover, my idea of heaven is being surrounded by free flowing and delicious creations from some of the world's best breweries. While I may not be in this particular heaven just yet, Pittsburgh does have an annual event that is about as close as you can get to my ideal scenario- the Pittsburgh Beerfest which during the winter edition featured here is at the convention center downtown.

Although this event is relatively young, the hundreds of samples available from local, national, and even a few international breweries makes this one as close to my picture of heaven as I can get.

Armed with an eight-ounce glass, an early admission ticket with all-you-can-drink access, and the Uber app on my phone ready to go for the end of the night, I was prepared to hit this one as hard as possible to try and find some new favorites.

We recently checked out the Pittsburgh CLO's performance of A Musical Christmas Carol at the Byham, which is a fantastic way to get in the Christmas spirit in Pittsburgh.

When it comes to live performances in the city, Pittsburgh has no shortage of venues and performing arts groups looking to entertain.

During a recent trip down to the Cultural District I was lucky enough to take in a dress rehearsal screening of the Pittsburgh Opera's rendition of Salome. Between enjoying the ambiance of one of our favorite performing arts venues, the Benedum Center, and taking in the show, it was yet another incredible night out in downtown Pittsburgh.

Doors Open Pittsburgh is a new annual event in the city where local businesses and public offices open their doors to give residents a behind-the-scenes look at their architecture, interior designs, and inner-workings. As it is our quest to experience everything Pittsburgh has to offer, we found this event to be a great way for us to see a side of the city that is normally removed from the public eye.

After exploring countless properties downtown over the course of the weekend, we have decided to share some of our favorites today in order to inspire you to get out and check out the next Doors Open event!

(Note– Several of the properties featured below are open to the public outside of the Doors Open event, so in some cases you may not have to wait until the next event date to go explore!)

Pittsburgh is very fortunate to have a thriving arts scene. For those who are looking to take in a show or performance, odds are good you'll be heading to one of the many halls and theaters in Cultural District right in the heart of downtown to make it happen.

For a recent show we made our way to the historic Heinz Hall to check out the Pittsburgh Symphony Orchestra as they put on yet another incredible performance worthy of their 100-year history. 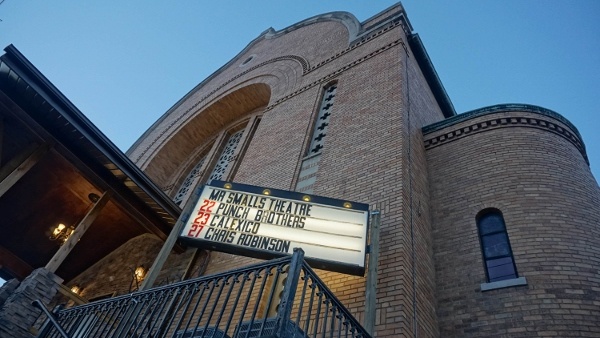 Much to the chagrin of music lovers in the city, Pittsburgh's concert scene often gets poor reviews.  Sure, a super group may play at Heinz Field once a year, a few big bands will play at the impossibly frustrating First Niagara Pavilion, and smaller but still well known bands may show up at Stage AE from time to time.

The frustration music fans have stems not from a lack of venues, we do have quite a few in the area, but more from the fact that for whatever reason, the huge bands people want to see just don't come here like in other cities. (To be fair, the music scene of lesser known groups can be quite good if you are looking for it).

Luckily for us, one of our favorite bands, the bluegrass-inspired Punch Brothers led by MacArthur Fellowship award winner Chris Thile (a musical God if there ever was one), loves to play in Pittsburgh and often hit a new venue during each visit.   The most recent of which led us to a night out at Mr. Small's Theater in Millvale, where we have one of the most enjoyable music experiences in recent memory.

For reasons unknown to us, Pittsburgh is crazy about fireworks.

Fourth of July? Massive fireworks. Randomly scheduled nights during Pirates games? Fireworks. When the Pirates get a home run? Mini-fireworks. A mega-band playing at Heinz Field? There will probably be some fireworks. A celebration to welcome winter and the Christmas season? It's freezing outside, but sure, let's have some fireworks anyway.

If you are wanting to check out these festivities, Pittsburgh will give you a chance to see some good shows roughly ten times per year (give or take based on the Pirates schedule). The only question from there is where you must be in order to have the best view. After exploring the city for several years, we have come up with a list of our favorite spots.