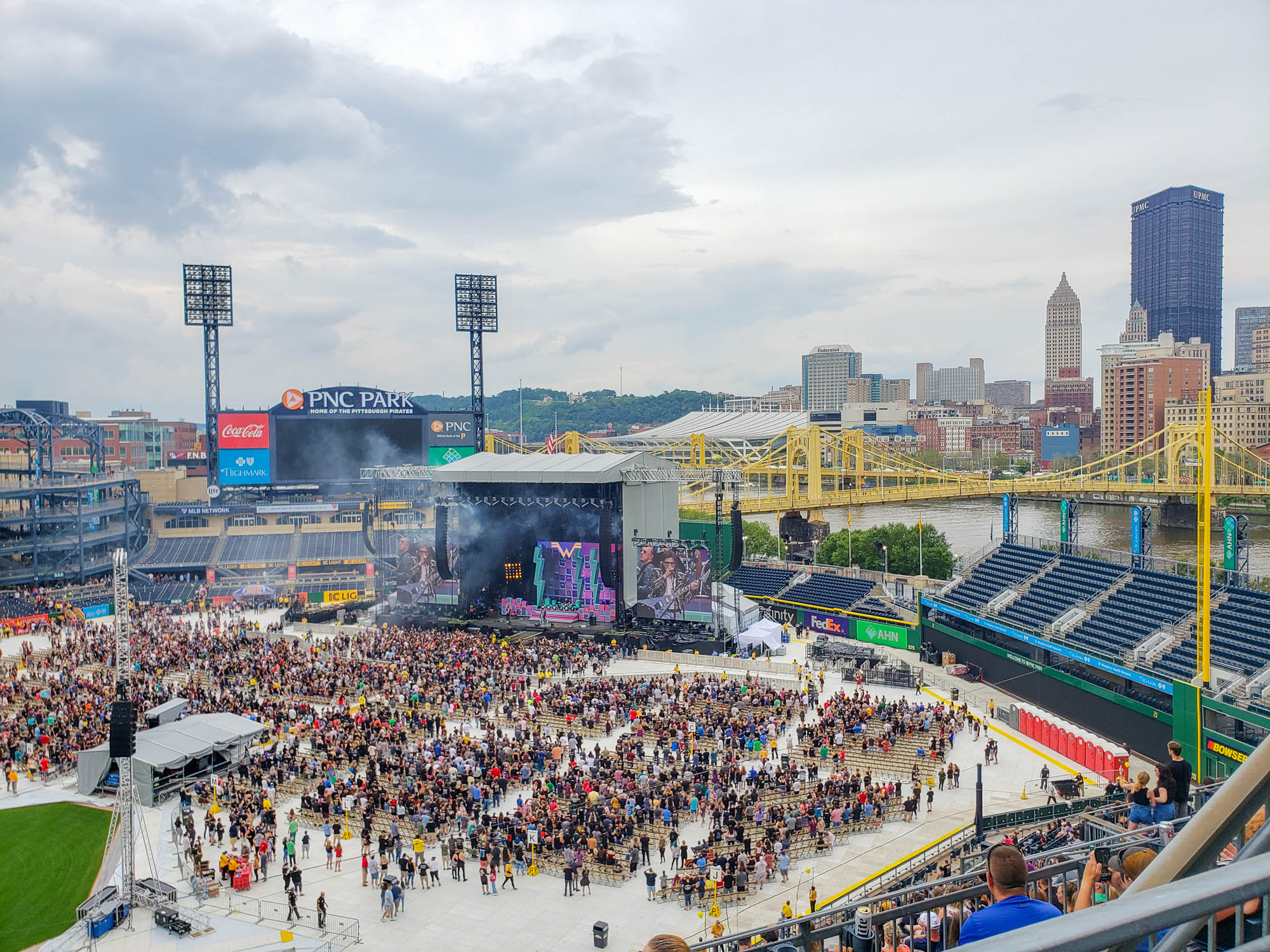 We always have a bit of apprehension when it comes to stadium concerts in Pittsburgh, and the Hella Mega Tour featuring Weezer, Fall Out Boy, and Green Day at PNC Park in 2021 was no different.

The reason for this is not specific to PNC Park outright (a stadium we absolutely love particularly for its views of the city), but rather that most sports stadiums are simply not the best for concerts from a viewing perspective. The stages are generally set up in the outfield and are rather far away from the bulk of the seats which inherently makes for less-than-stellar views outside of the pit.

As it turns out, we ended up really liking our experience at PNC Park and would gladly return for a future show as the vibe, sound, and views of the city more than made up for the views of the stage outright.

So in this one, we wanted to share a few things to keep in mind before buying tickets to PNC Park concerts!

Where Are The Best Seats for PNC Park Concerts?

When it comes to picking a seat for a concert at PNC Park, we have good news and bad news.

The bad news is that the stage is generally set up in the outfield, which means if you are not on the floor and in the stadium seats, odds are good you'll be so far away that you have to look at the screens to see the bands in any detail. This is, of course, a drawback to stadium shows virtually everywhere- not just at PNC Park. We mentioned this at the start of the article but it is always a good reminder to temper expectations when it comes to views- only those on the floor will have what we think of as close views and those will likely come at a hefty premium. 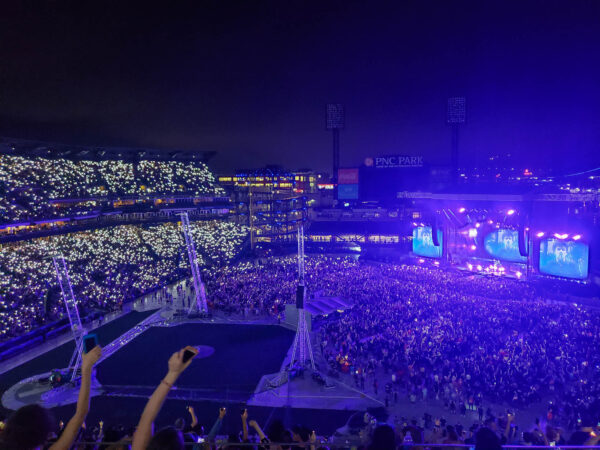 The good news is that the sound at PNC Park carries quite nicely, so as long as the bands have everything tuned appropriately, every seat in the house should have good sound at least. During our show, we were quite impressed with this and think the sound had virtually no faults that could be attributed to the stadium at least (now if a certain crew isn't as good, well, that could be different- we've heard about other shows here that were less than impressive).

From there, we probably would avoid recommending any sections of the seats that are on the fringes of the stadium as the viewing angle for the stage can get awkward. Sections ending in 01 to 07 and 28 to 30+ would be of special concern to us but how much obstruction there is could vary based on the stage design itself. We personally sat in 309, Row H, Seats 5-6, and were in the row right above the walkway which allowed for some pretty exceptional views, unobstructed, while still being in the nosebleeds in a row of just six seats wide. Gems like these are abundant at PNC Park and worth seeking out.

Finally, take an emergency poncho if rain is in the forecast. Only the last few rows of each level are covered so unless you are really far back you will be exposed to the elements. A cheap, disposable poncho from a convenience store kept us fairly dry and allowed us to witness an epic rainbow during a set change while half the stadium ran for cover. It pays to be prepared!

Parking and Other Amenities at PNC Park 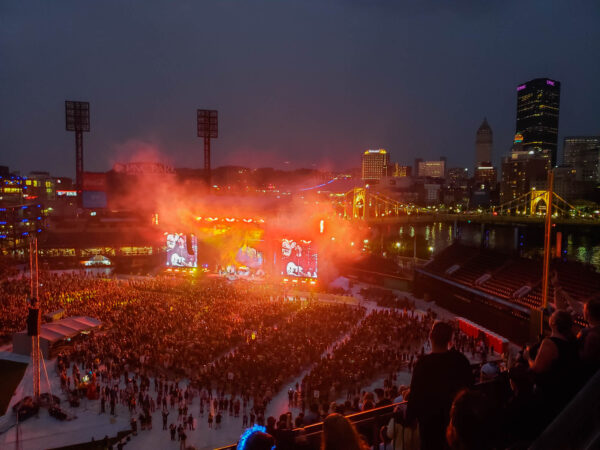 When it comes to concerts at PNC Park, you have a few things to keep in mind beyond just seating. First off is that, unlike baseball games, concerts are more or less guaranteed to sell out. This means a massive influx of people parking at the garages and surface lots in the North Side and Downtown, as well coming in via the T.

As such, you can generally assume that the area in and around the park will be a madhouse- on both sides of the Allegheny River. This may be a bit easier to navigate on your way in, but after the concert is over expect gridlock traffic for quite some time on the scale of a Steelers Game. As such, unless you are staying at a hotel nearby, you may want to park further away, walk over, and give yourself a bit of breathing room for the traffic.

The garage at NOVA Place in the North Side has somewhat respectable surge pricing (they charged $15 during our 2021 show) and was a bit more accessible than other nearby parking lots, and some street parking can be found in and around the area too (we do not recommend parking in neighborhoods out of respect to residents but also the streets closest to the stadiums may have bigger fines for permit violators on event days). 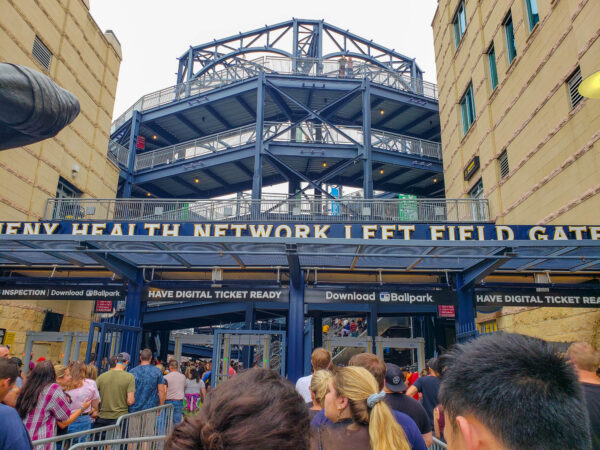 Despite a sell-out crowd, during our show (which we admit was quite long- about 5 1/2 hours in total thanks to having three bands and an opener) guests seemed to arrive at a somewhat staggered pace. This, coupled with there being many gates at the park, means we were able to blast through security in just a couple of minutes; however, it is worth noting that the main gates get bigger lines than those on the sides so you may want to enter via one of these for quicker access. It was among the easiest of all the major venues we've been to.

From there, the concession options at the park are generally chain restaurants or conventional concession fare (not much in terms of local) and domestic beer prices were over $15 after tax for a 24 ounce in 2021 with prices seeming to rise about 7.5-10% per year. As such, we personally would recommend eating and drinking elsewhere before the show for a better value. There really are many great options nearby in the North Side and downtown.

One final thing that is always worth noting at concerts is that venues often have impressively small bag policies such it is virtually impossible to bring in any bag bigger than a wallet. PNC Park is no different.

As of 2021, PNC Park only allows in bags 8” x 5” x 1” or smaller (unless used exclusively for medical equipment or diaper bags) and is, in our opinion, awful. Much like other stadiums, we saw many people (primarily women) having to go ditch their purses at the gate because they were unaware of the bag policy upon arrival. If you park nearby, this isn't an issue, but since many people do not, this can be a big problem. As such, always check out an arena's bag policy before you go as rules regularly change.

Overall, we went into our show at PNC Park with somewhat low expectations because stadium tours often get a lot of criticism. They are designed for games and not concerts, after all. But in the case of PNC Park, we were rather pleased with our experience overall and despite some minor concerns over actually seeing the band well, we thought the sound and overall experience more than made up for it. Just pick your seats accordingly and plan for inclement weather and you'll be good to go!

We attended the Hella Mega Tour at PNC Park in 2021 for this review. Pricing and other logistic factors may change from show to show and should be verified prior to buying tickets and heading out to the stadium.

Looking for other stadium reviews? Check out our articles for Acrisure Stadium, PPG Paints Arena, Star Lake, and Stage AE! 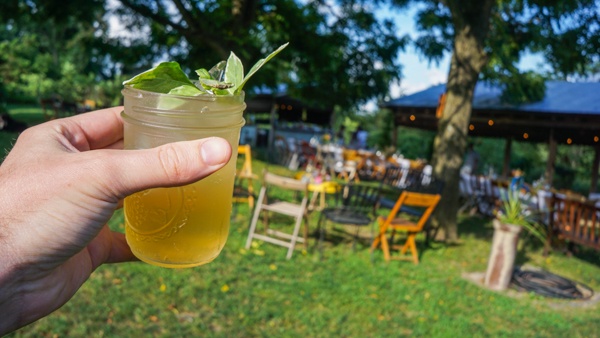 Are you in local Pittsburgh media (such as a blogger or Instagrammer)? Let’s meet up!
227 shares