Sometimes we visit festivals after doing minimal research, if only because we want to take things in without any preconceived thoughts on what it should be like.

We can safely say we did this for the Pittsburgh VegFest (which takes place in the North Side each August) because we only learned of one very interesting point just before arriving- this one is a vegan festival.

This little detail only made the event better.

Pittsburgh VegFest Celebrates all Things Vegan (and Then Some) 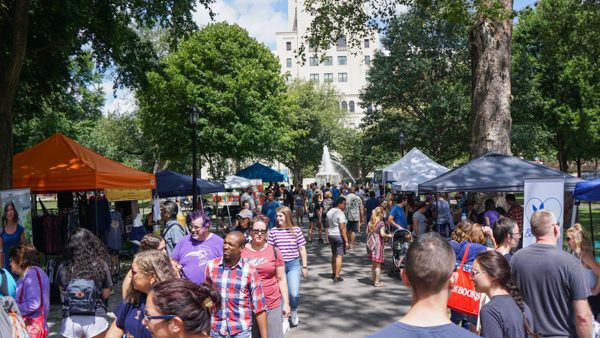 It doesn't take long after arriving to the Pittsburgh VegFest to realize that this event is far more than simply a vegan food festival.

While the food is one of the centerpieces of the event, the festival also celebrates vegan culture with books, shirts, and other products, as well as ancillary industries like animal welfare, chemical-free living, ethically made products, and the like. As such, you can really make a day out of it if you are interested in visiting all the vendors to check out products beyond the food, as this festival has a ton of them! 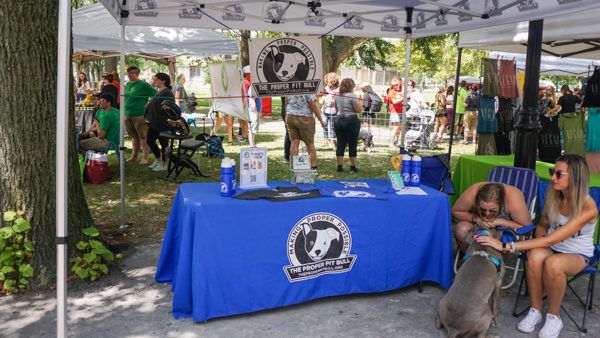 But for us, we were in it for the food first and foremost. 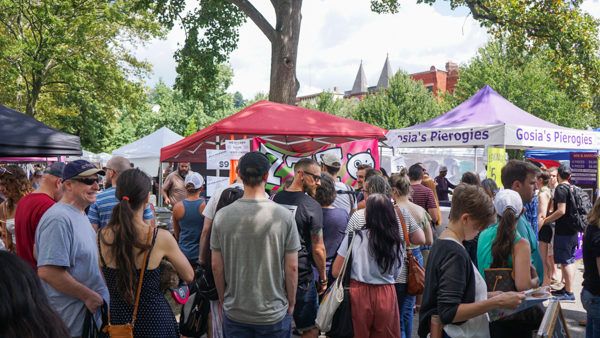 If there is one blanket statement we could make about the VegFest, it would be this- the event is popular. So popular, in fact, that even the roughly two dozen food vendors on-site couldn't keep up with demand from hungry guests.

We arrived at the festival right around the peak of lunchtime and found that the vast majority of food vendors (apart from a few outliers) had lines ranging from 15 to 45 people deep. We snagged a falafel sandwich from the Hummus food trick, which only had a line of about eight people, but promptly gave up hope of sampling from anyone else lest we want to give up a good chunk of the afternoon in line- it was that busy. 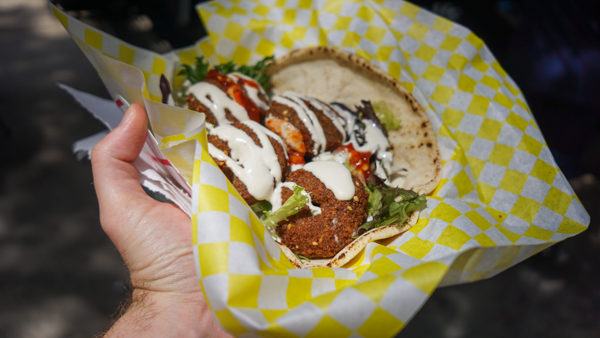 Going further, we also found that a number of vendors had dishes containing tree nuts (common ingredients in vegan cooking), which made subsequent dining hard for Angie specifically due to her allergy.

Many of the vendors had notes about what the ingredients were in their dishes, but it also seemed like a fair number did not. Couple that with the lines we decided it was not worth the risk to wait at a few and not have the chance to not be able to order anything (this is only a minor note).

Considering the lines, we found ourselves wondering if the food vendors would run out of items, and shortly after arriving home we started to see social media postings about how some vendors ran out of food before the end of the event (some several hours early). While we cannot confirm that this happened at all the food vendors, we would not be surprised if it happened more than what we saw.

As such, the normal recommendation of arriving early is not enough. For this one, arriving as close to the start of the event as possible is essential for the best experience

For a festival that celebrates all things vegan food, culture, and ancillary industries, this one does a stellar job. But during our visit, our only complaint would be that it is too popular for its size, resulting in some fairly long lines and restaurants running out of food early. It is our hope that this one will expand to be even larger in the future, and when it does, we'll be ready for it!

Pittsburgh VegFest is a one-day event that occurs in the North Side every August. 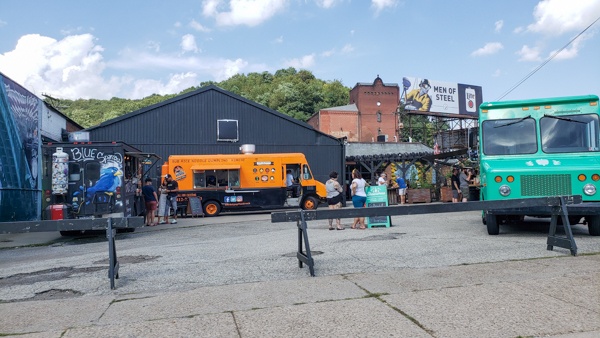 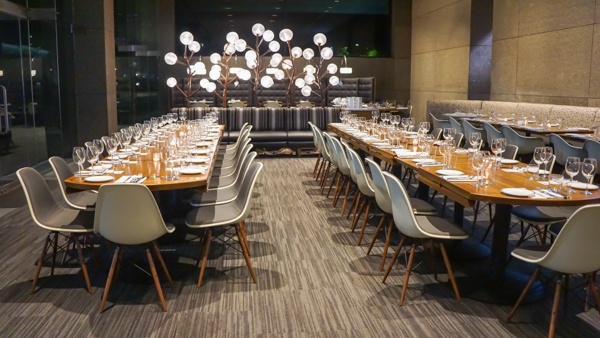 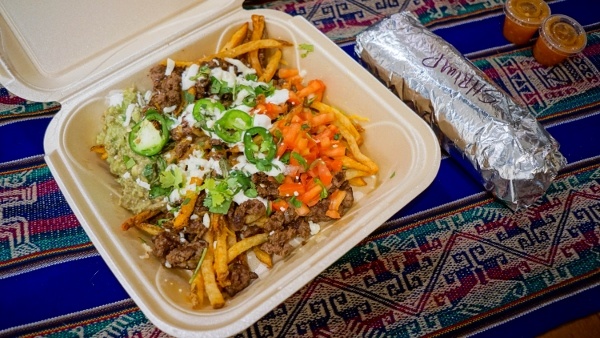 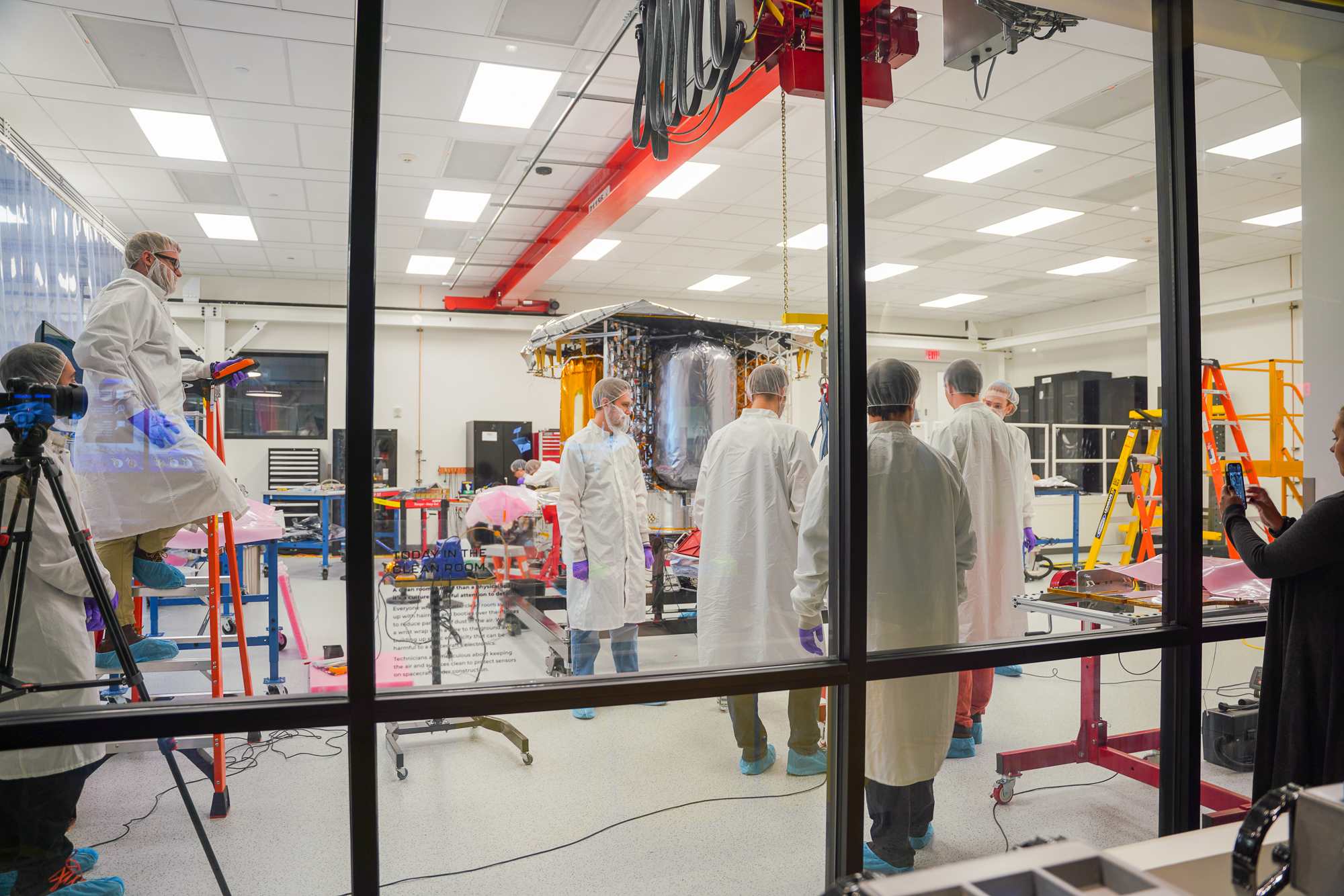 Are you in local Pittsburgh media (such as a blogger or Instagrammer)? Let’s meet up!
205 shares