Lola Bistro on the North Side is a cute, cozy spot in a residential neighborhood that describes itself as serving international comfort cuisine.

Offering dishes from many different countries around the world and executing them all equally well is an ambitious goal, but in theory we are big fans of the concept. It's the kind of restaurant that we really want to like- but we think it needs a few tweaks before it will be there 100%.

A Glorious Menu at Lola Bistro

We came here on a whim after our initial plans got canceled so we didn't plan properly for the BYOB aspect of the restaurant.

At first we were a little bummed, but the restaurant was full of happy looking patrons and smelled pretty delicious so we decided to stick around despite our lack of wine. 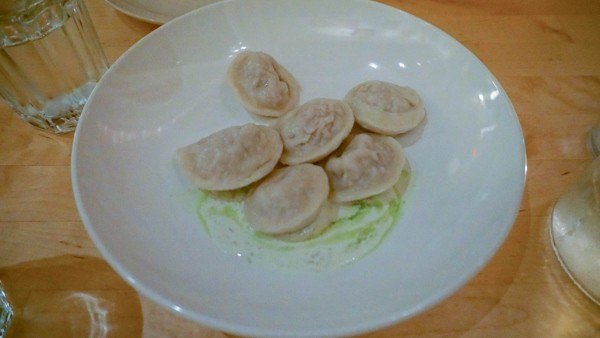 As we sat down and read the menu it was a little mentally jarring seeing words like Siberian dumplings, Vietnamese noodle bowl, and Sumatran chicken curry all on the same page.

At first it was challenging deciding what to order as we were torn in many different directions and flavors, wanting to pick the best appetizers and entrees but also wanting to make sure that the diverse flavors of the different dishes that we ordered would mesh well.

Our waitress was helpful in describing different dishes and answering our detailed questions about them, as well as telling us a certain dish was going off the menu in a few days so we should order it if we wanted it (as it turns out, we ordered the very last one).

We restrained ourselves from the delicious sounding cheese plate and charcuterie plate and started off with a more unusual appetizer, the pelmeni (traditional Siberian dumplings).

You really can't go wrong with dumplings from any culture, and these were no exception. The beef and lamb filling had a great seasoning; the sour cream and scallion oil that the dumplings were served with was a gourmet touch.

For such a humble dish as dumplings, the presentation of it was very striking and beautiful.

The Entrees Need a Few Improvements 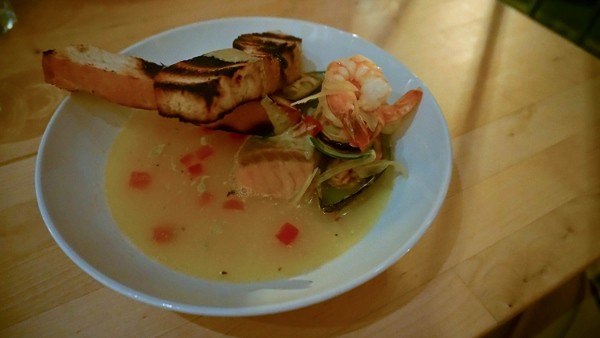 For our entrees we chose the saag paneer and the cioppino. Both dishes were presented beautifully and could have come from the kitchen of any gourmet restaurant in the city.

The cioppino consisted of mussels, shrimp, and salmon all in a saffron fumet. The broth was mild and lacked the flavor punch we were looking for, and the dish could have definitely used more seafood for the price. 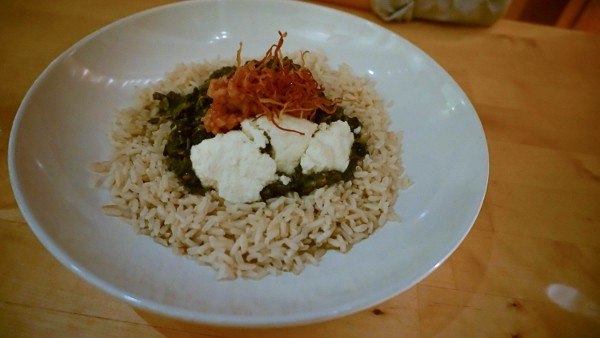 We also ordered the saag paneer, which was curried spinach served over brown rice and topped with house made paneer and chutney. The spinach was cooked well and the curried flavor was mild. The few bursts of flavor that I got came from the dollop of gingery chutney on top and a pretty garnish of fried ginger that also gave a nice crunch.

The house made paneer was not firm cubes like you normally see in Indian cuisine, but a soft delicate cheese more like a ricotta. I would have loved to have several more spoonfuls than what was given on the plate as it was quite tasty even for its differences from traditional paneer.

Overall, we appreciate the care that went into thinking of this menu concept and the emphasis on presentation. We wish the dishes tasted closer to the mouth-watering menu descriptions, and that the dishes were priced a bit lower for their size.

These are two issues that could be improved as Lola Bistro grows, and we look forward to seeing how they progress into the future as they are a unique addition to the North Side's restaurant scene that we'd love to see take off.

Lola Bistro was located at 1100 Galveston Avenue in the North Side but appears to be closed as of 2022.

Are you in local Pittsburgh media (such as a blogger or Instagrammer)? Let’s meet up!
164 shares