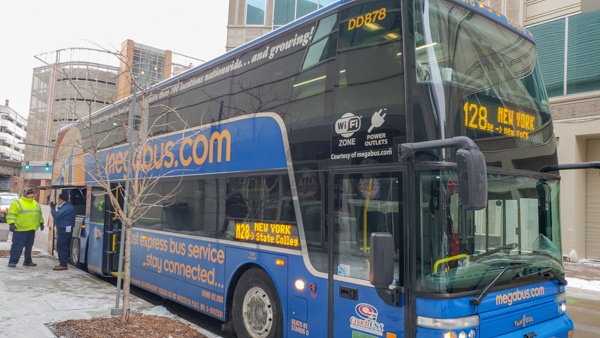 Are you looking to travel from Pittsburgh to New York? Well, you're in luck- there are actually a number of options available beyond just flying.

Whether you're looking to take Megabus, Amtrak, drive, or even fly, there are a number of travel options for you!

As we've taken more or less every transportation option in our travels from Pittsburgh to NYC, we wanted to break down the options in detail in this one. 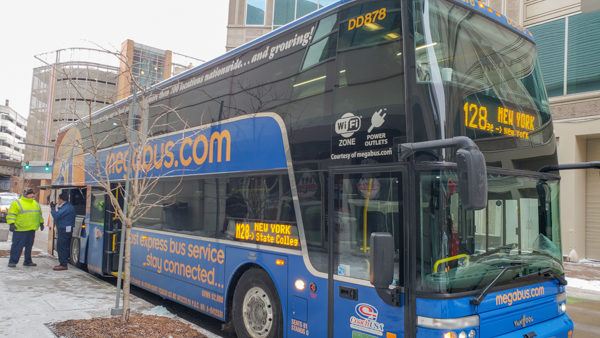 Megabus offers several buses from Pittsburgh to NYC, departing throughout the day starting at about 9am and departing at noon, 3pm, and 11pm for an overnight ride (a similar schedule is true in reverse) and arrives to New York in about 8 1/2 hours if there is no traffic.

Megabus is known for fares as low as $1, and while those go quickly I was able to get a one way ticket with a reserved seat for $11 plus fees ($2.75) about a month before my early 2019 trip. $13.75 for a one-way on Megabus, Pittsburgh to NYC is hard to beat if you ask me, but it is worth noting that last minute rates have exceeded $50 one way in our research as well.

The pickup spot is conveniently located in downtown Pittsburgh near the convention center at Penn and 10th (although may be within a block pending if a conference is going on), and included a 30 minute stop in State College. The bus typically drops off at 7th in 28th in New York, just a block from the 1 subway line and a few blocks from Penn Station. 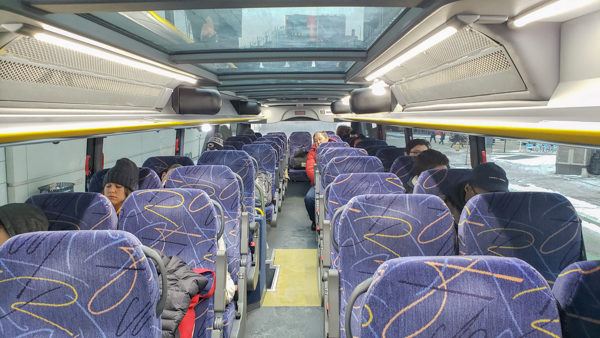 While Megabus has a bit of a reputation behind it for delays, broken internet, power outlets down, etc., at the start of our trip we left more or less on time and both the seat power and wifi was operational (perks of a Pittsburgh departure, perhaps?).

However, about an hour into the ride the internet connection wasn't good enough to play movies from the Megabus app the times I tried. (Likewise, the toilet gets exceptionally gross by the end, so plan your breaks accordingly.)

As the route travels route 22 and I-80, I can't speak of many great views other than the occassional vista when going through the hills. Otherwise for the most part the view includes passing by smaller towns and boroughs more than nature.

As a bonus, however, I was quite lucky in that we arrived in New York City exactly on time (to the minute)- something that is almost unheard of with bus travel.

Reserved seating was not entirely necessary for those traveling solo, but is more a good idea if you want to sit at the front of the bus, at a table on the first level, or be together with a group. The last couple that boarded had to split up as there were no general admission seats together (these are first come first served).

Overall, Megabus isn't the most comfortable travel experience, but if you're looking for cheap and easy travel option and can deal with the somewhat cramped space and time, Megabus is for you.

Note: We've been asked to include Greyhound in this guide as well, but as we have not taken the bus service yet we cannot compare the on-board experience as we can with others featured in this guide. Pricing for Greyhound seems to hover around $40 regardless of dates ($37-$43 in early 2019), suggesting that they do not have the early bird pricing discounts of Megabus but are cheaper than last minute bookings by a few dollars. Likewise, Greyhound often appears to take longer and/or require a transfer. 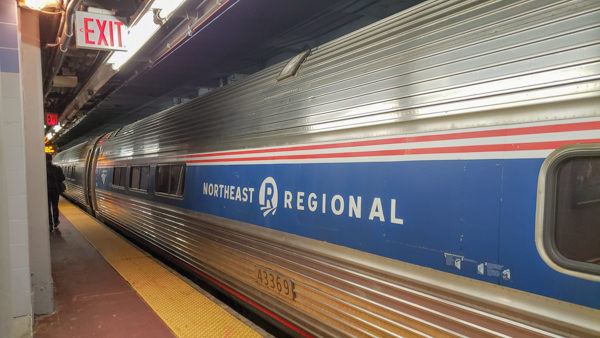 The train from Pittsburgh to NYC is another great option, and is one I did on return from New York on the aptly named Pennsylvanian train. Other lines exist that will get you to New York but require a transfer, so we are excluding those from this guide at this time.

The Pennsylvanian from Pittsburgh to New York departs downtown Pittsburgh at about 7:30am and arrives at Penn Station just before 5pm. On the return the train departs New York at 10:50 and arrives in Pittsburgh just before 8pm. This is ultimately a 9 hr and 20 minute ride, about an hour longer than an on-time Megabus, and is mostly due to the fact that the train route between Harrisburg and Pittsburgh is quite slow (you are at the mercy of the speed of the cargo train in front of you). 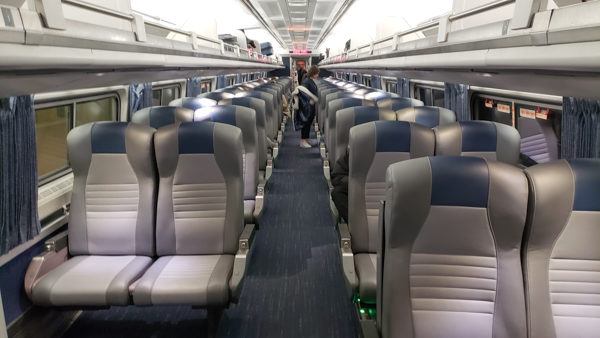 In early 2019 a one-way ticket on Amtrak for this route was about $60 for a regular coach seat and about $100 for a business class seat when booked a month in advance (I purchased business class), and closer to day of departure increased to about $80/$120 for the two classes respectively.

As I splurged for business class on a recent trip the synopsis may be a bit biased, but the comfort of the seats and ample leg room more than made up for the price difference and increased trip duration to me. Throw in working wifi*, a dining car, the ability to walk around, and great views and I would say that Amtrak is our preferred method to travel from Pittsburgh to New York when we have the time.

*We've read reports that wifi works mostly only in business class and the dining car, so if you are planning on working / requiring wifi then the upgrade to business class may make more sense. If you can do without, the upgrade may not be as necessary.

Drive from Pittsburgh to New York

Driving to New York City is simply not recommended in our opinion. The fastest route is over six hours of driving without stops which is equivalent to $35-$50 in PA turnpike tolls (whether you have an EZ Pass or not), $45 or so in gas, plus additional tolls and parking fees when arriving in NYC based on where you are staying (and that is just one way).

Personally, unless you are driving with a long group or are on a road trip apart of a larger journey, we think the cost greatly outweighs the convenience when Amtrak and Megabus are more economical options. And as an added bonus you won't have to drive in NYC, which no one does because there are too many cars on the road.

Fly from Pittsburgh to New York

Many flights exist to travel between Pittsburgh and New York City, both direct and with layovers, and to JFK, LaGuardia, and other further out airports that require more creative transit to get into the city.

Depending on when you book we've seen direct prices to LaGuardia for under $200 round trip (about the same as business class on Amtrak booked early enough) and last minute tickets pushing $500.

Flights themselves are a brief 90 minutes, but when you factor in getting to the airport early, picking up luggage, traveling to and from the airports, delays (there are almost always delays in the New York Airports), you are looking at several hours- still the fastest option available beyond private chartered flights.

That being said, New York airports are some of the worst for flight delays, and virtually every time we've traveled through these airports our return flight home has been delayed anywhere from 30 minutes to several hours. As such, we try to avoid flying through any New York airport if we can.

To find a great flight deal, check out options from Skyscanner by clicking here.

So, thinking of taking a trip from Pittsburgh to New York City soon? Comment below to let us know which option you prefer!

Don't forget to book a hotel in New York for your stay as well!

10 thoughts on “How to Travel Pittsburgh to New York – Megabus, Amtrak, and More”

Are you in local Pittsburgh media (such as a blogger or Instagrammer)? Let’s meet up!
4197 shares