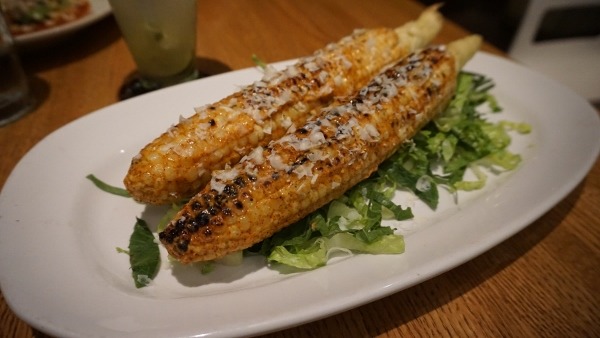 Update: Verde closed shortly after our visit in September 2015.

As we've said multiple times in the past, we're on a quest to find the best Mexican food in Pittsburgh. And while we are pretty sure that will come in the form of a divey hole-in-the-wall location, we are also trying more traditional and upscale restaurants like Verde Mexican Kitchen & Cantina in Garfield.

When perusing the menu before dining there we had somewhat high hopes, especially given that their menu boasts they have the largest tequila collection in the state. Unfortunately, the meal wasn't entirely consistent and the drinks left us wanting more.

Ordering a Round of Tequila Based Cocktails 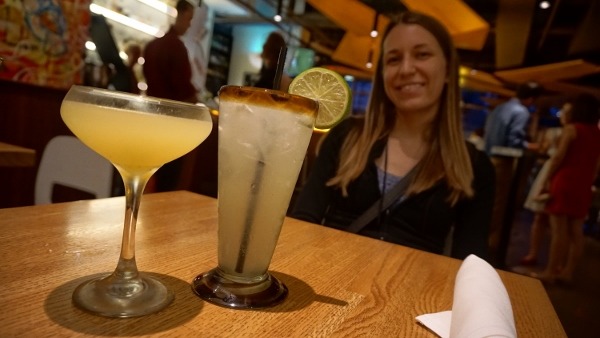 We started with tequila drinks including a jalapeno-pineapple tequila cocktail that we were expecting to be spicy but just had a tiny hint of heat. We also tried the paloma, a traditional Latin American drink with tequila, lime, and grapefruit soda. It was reminiscent of the palomas we've had in Mexico but could have used more tequila as neither drink seemed to be particularly strong.

That is never an encouraging start to a dinner.

Stick With The Appetizers Over the Tacos

As the taco selection on the menu sounded pretty good, we ordered three different tacos and two appetizers. Overall, the appetizers had much more interesting flavors and were more consistent than the tacos. 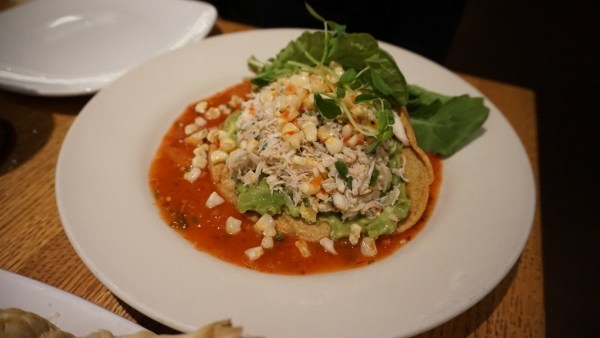 The crab tostada appetizer had a nice sweetness from the crab, corn, and mango, balanced by a smokey tomato salsa. The only thing somewhat unexpected with this dish was that the tortilla itself was piping hot from just being fried, while the toppings were cold (and meant to be) making a really unique contrast that you do not get all too often.

Our second appetizer was the best dish of the night, a Mexican street food called elotes. This dish consists of grilled corn on the cob which is smothered with mayo and chili powder and topped with cotija cheese. It was perfectly spicy (okay, really spicy- in a good way), creamy, and sweet, and just like we remembered from our travels in Mexico.

Unfortunately things took a turn for the worse from there as we ventured into the taco course. One of the main problems was that each taco was served with only one tortilla shell which basically disintegrated once all the sauces soaked through a few minutes after being delivered to our table. 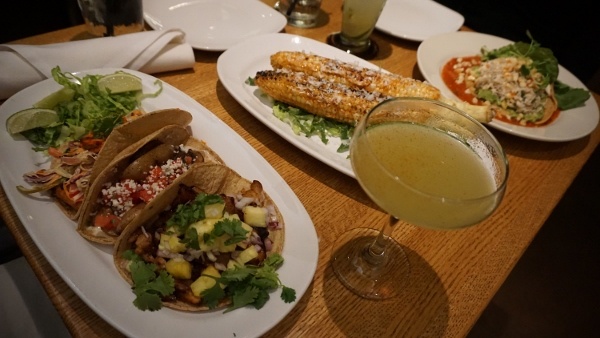 We tried the taco al pastor which, while it tasted nothing like any taco al pastor we had in Mexico, was the best taco of the three. The marinade on the pork tasted more like an Asian-inspired General Tso's sauce rather than the achiote seasoning of traditional al pastor. The second best taco was the fish taco which was topped with a cabbage slaw and chipotle aioli. The final taco we tried was the potato and mushroom taco which sounded promising but had almost no flavor at all. The potato hunks were so big, and the sauce just completely wrecked the tortilla into pieces, that it was not very appetizing and rather hard to eat.

We Want the Tequila Bar

The tequila and mezcal menu was one of the bright spots of this restaurant, and if we came back, we would definitely splurge on a few tasting flights. The menu has brief descriptions of each and every tequila and mezcal to help you make an educated choice, as well as pre-set flights consisting of the bartenders' and waitstaff's favorite selections.  Considering they have approximately 150 tequilas and 30 or so mezcals on hand, the recommendation list is much appreciated.

Overall, the appetizers at Verde Mexican Kitchen & Cantina were the standout items of the night.  The tacos, on the other hand, were a significant let down and not worth the rather high price point of $5-$6 each.  While we don't envision returning here for more tacos, we are tempted on a return for a tequila tasting and an appetizer or two.

Verde Mexican Kitchen & Cantina was located at 5491 Penn Avenue in Garfield but closed in September 2015.

Are you in local Pittsburgh media (such as a blogger or Instagrammer)? Let’s meet up!
7 shares