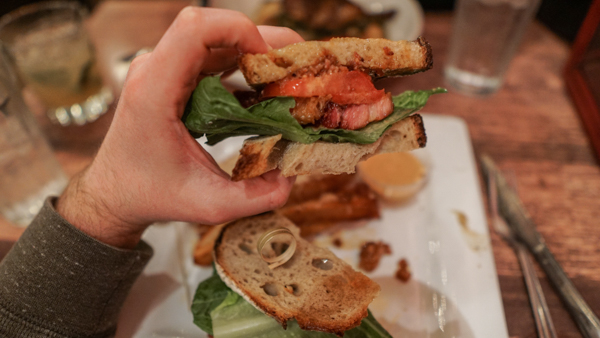 Supper on Penn first started as a concept at the incubator restaurant Federal Galley in the North Side. During its tenure, we were fortunate enough to eat our way around the menu and become quite big fans of the concept overall. So when this one spun out for its own restaurant in the Strip District and retained most of the styles perfected while at the galley, we were quite excited.

Despite being somewhat let down on the space of this one, the menu delivers with all of the things we loved about the galley concept (and more) with approachable takes on modern dishes.

A Wide Dining Spectrum at Supper on Penn 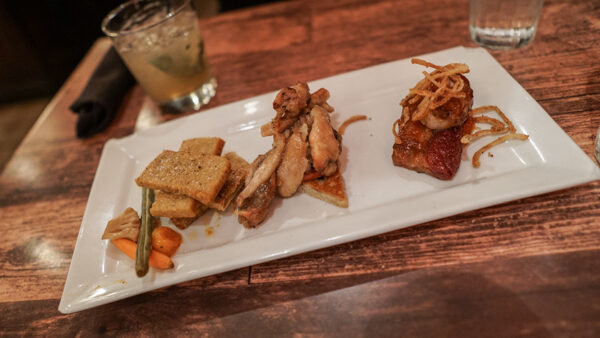 The menu at Supper on Penn has four distinct sections- bites, snacks, sandwiches, and plates. Bites are priced just a few dollars each and ordered in multiples (minimum three) in a kind of DIY appetizer while snacks are a bit larger portions like you'd consider most traditional appetizers to fall under.

As we thought the bites setup was fairly unique, we gave it a try with a selection of crispy panisse (chickpea cakes with pickled vegetables), chicken montadito (with bacon jam, smoked tomatoes, and a quail egg), and a scallop (served on a generous portion of plum-ginger glazed pork belly with smoked tomato, onion, and chive).  This combo was really well done as the panisse offered a nice complement to the more meat-forward chicken and pork/scallop bites. While we did not need any more food with the entrees that were coming, we would love to return and try a few more of these bites overall. 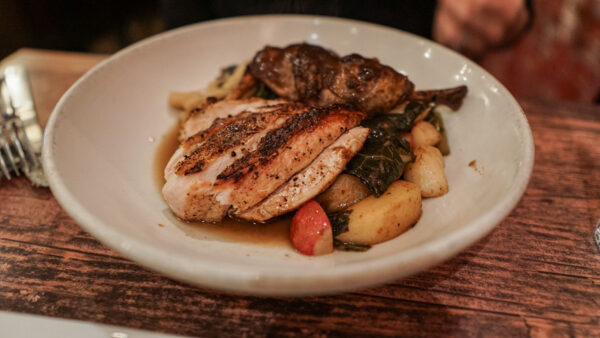 For our entrees, Angie ordered the Chicken and Dumplings, and I opted for the BLT Sandwich.

The Chicken and Dumplings came with a duo of chicken including a seared breast and a braised leg and thigh with mascarpone dumplings, greens, roasted vegetables, and more. The first thing you'll notice about this one when it comes out is the massive amount of chicken, and while we devoured the fattier leg and thigh much faster than the breast, we had enough chicken for a solid meal of leftovers all the same.

The dumplings also came out with a rather divine texture that worked out really well with the roasted vegetables, and we have to admit we would've traded a bit of the chicken for more of the dumplings- they were quite good! 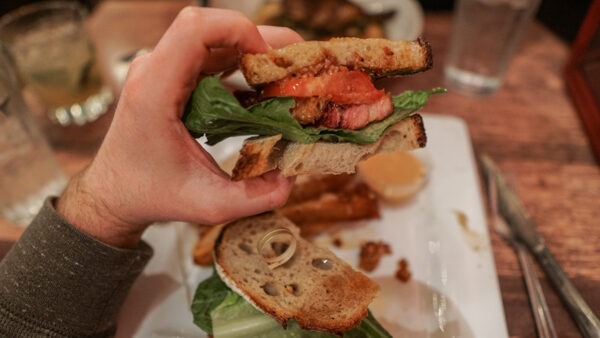 My BLT was a variant of the traditional sandwich and replaced bacon strips with a confit pork belly and bacon jam plus a black garlic aioli and was served on housemade sourdough with duck fat fries on the side (a favorite of ours from the Galley concept). Much like the pork belly that came with the scallop, this one was the star and had a nice crispness too it while preserving the great texture in the fatty cut of pork (which was further enhanced with a smattering of bacon jam and the aioli).

My only minor knock on the BLT was that the housemade sourdough was not toasted and had a few bites that were a bit too chewy for my liking. Still, a minor complaint in an otherwise great sandwich that I'd go back for many lunches to have. 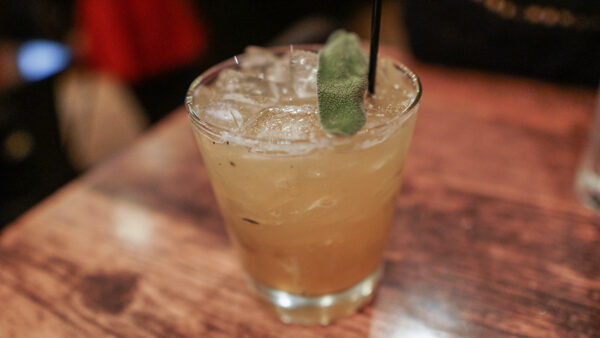 The bar menu at Supper on Penn has a spectrum of classic cocktails, a few craft beers on tap, mostly domestic options in cans and bottles, and a few wines by the glass from R Wine Cellar (located a few blocks down in the Strip District).

During our visit we were only able to try one cocktail, the Rusty Nail, which featured Jameson, burnt sage, honey-apple syrup, orange zest, and an egg white (although we did not notice any froth, so we're hoping that the egg white was simply omitted on this one). We'll be the first to say this cocktail is quite sweet, but we also like that the flavors had a kick to it. Throw in the fact that most cocktails run at or under $10 here shortly after they opened, and you have a very approachable price point for the city.

We enjoyed our meal fairly well at Supper on Penn. But there was one thing that caught us off guard when visiting this one- the space.

The Space is a Bit Unusual for the Food 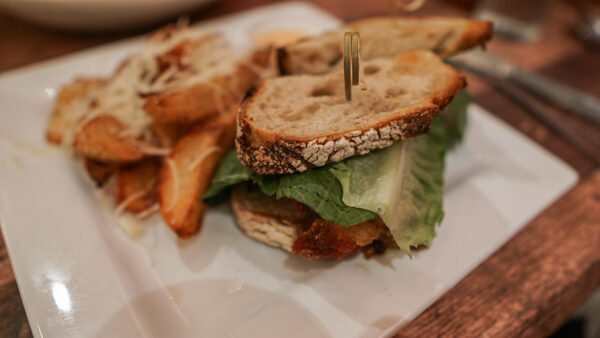 When we think of the concept of approachable modern dining, we think of higher-end takes of dishes you are familiar with, reasonably priced, and presented without any of the extra fluff and fanfare you see at the fanciest of establishments. Supper on Penn delivers on this with its food almost perfectly.

But we have to admit, the space at Supper on Penn swings the pendulum a bit too far in the opposite direction in terms of ambiance, as the setup of this one took away from the food just a bit too much for our liking.

The reason for this is that Supper on Penn is located in a space that feels more like a neighborhood pub than a restaurant. The bar is the prominent focal point of the room. The tables are conventional restaurant-style with some high-tops mixed in. The bathroom door sticks. The lighting is dim in a “sports game is coming on” fashion more than what you'd expect for eating a nice scallop on top of perfectly cooked pork belly.

We often gloss over the details of the ambiance of a restaurant as, to be honest, most restaurants in the city serve their purpose quite well in this regard. But at Supper on Penn, this detracts from the meal a fair bit. We do not want to say this as a bad thing to discourage you from visiting, because the food is worth going for, but it is something you should be aware of going in. It was the first thing Angie and I commented on as soon as we walked out the door all before talking about the food itself.

Overall, despite the ambiance of this particular restaurant, we really enjoyed the menu here. It is everything we loved about the concept at Federal Galley (and then some) and had some pretty delicious options to choose from. But if you're anything like us, you'll do well with ordering anything and everything with the pork belly in it. It was the clear winner of our visit!

Supper on Penn was located at 1211 Penn Avenue in the Strip District, right at the neighborhood boundary with downtown Pittsburgh and closed in late 2020.

Looking for more restaurants in downtown Pittsburgh and Strip District? Check out our neighborhood guides at the previous links!

Are you in local Pittsburgh media (such as a blogger or Instagrammer)? Let’s meet up!
24 shares