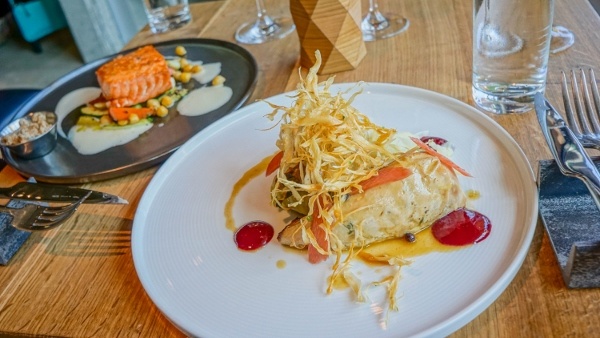 Superior Motors closed in 2020 due to COVID and announced in 2021 that they will not be reopening.

Superior Motors is possibly one of the most anticipated Pittsburgh restaurant openings ever. Conjured up by Kevin Sousa of Salt of the Earth, Union Pig and Chicken, and Station Street Hot Dogs fame, Superior Motors has been more than three years in the making.

We were excited by the concept of Superior Motors- a restaurant injecting life into a neighborhood formerly centered around the steel industry (and that still has an active steel mill), growing a lot of its own food, and hiring neighborhood residents to teach them useful skills.

And, judging by the more than $300,000 that Kevin Sousa raised on Kickstarter for his project, other people were excited by the concept, too.

We recently paid a visit to the restaurant just a few weeks after its opening. While we weren't blown away, there are hints of positive and inspiring things that could persuade us to return after some of the opening kinks have been worked out.

A Lot is Going on at Superior Motors 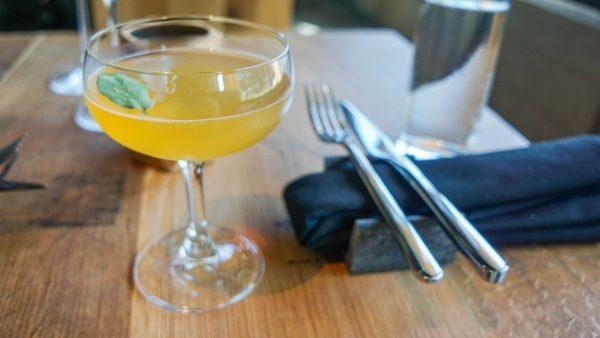 The drink menu has several craft cocktails and a smattering of local and other craft beers, but the focus here seems to be on wine. There are a few wines offered by the glass, and something called the Dual Strand, which is two half pours of two different wines.

We took advantage of this option and on our visit it included two white wines, one from Spain and one from the US.

I wish I could tell you what kind of wines they were, but unfortunately our server didn't tell us anything about them in the slightest- including which was which when they arrived. 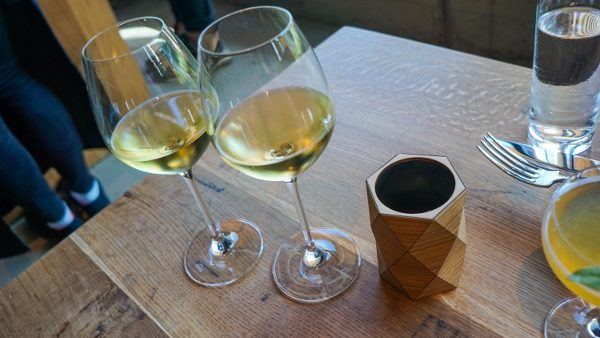 We also tried a few cocktails. The first was a mezcal, grapefruit, and sage concoction (simply named mezcal) that was just mildly smokey and a little sweet. It proved to be the better option over the second cocktail we ordered, which contained bourbon, Maggie's Farm coffee liqueur, maraschino, and lemon (named bourbon).

The lemon flavor definitely overpowered this drink and sadly was one of the predominate flavors over the coffee or cherry. 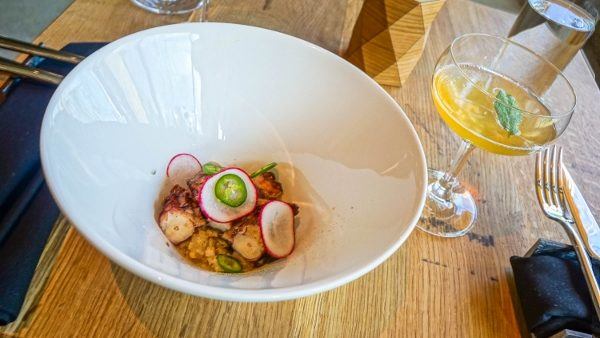 The food menu seemed to us pretty comparable to other fine dining menus in the city in terms of types of dishes offered.

Appetizer options included a mix of standards like beef tartare and foie gras along with some trendy options like octopus and beef tripe. Entrees included chicken, beef, pork, lamb, and fish dishes as well as one or two vegetarian options.

We decided on the octopus appetizer which was one of the more delicious choices of the evening – we were just sad that the portion size was so small for the price. The octopus pieces had some nice char on the outside but still managed to be perfectly tender.

A creamy, funky sauce with a hint of sweetness mingled with the octopus that contained corn and huitlacoche. Slices of spicy serrano and crunchy radishes topped off the dish. 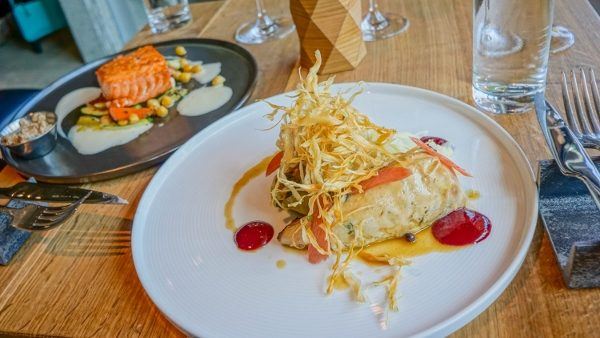 Our entree choices were the chicken and the salmon, recommended by our server. The chicken was a little tough but was served on a delicious tart, fruity blackberry sauce. On the side was a cabbage roll stuffed with shredded chicken, and on top was sauerkraut and crispy strands of cabbage. It seemed a little out of place for a height-of-summer entree. 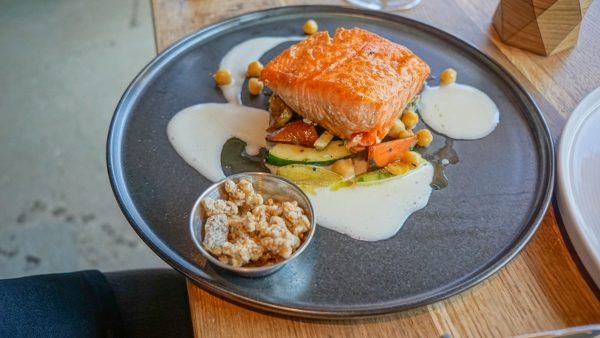 The salmon was cooked really well and was very tender and moist. It rested on a mix of vegetables including zucchini and charred carrots as well as chickpeas. A slightly tangy and creamy buttermilk sauce dotted the plate. The overall flavor profile was classic and simple. 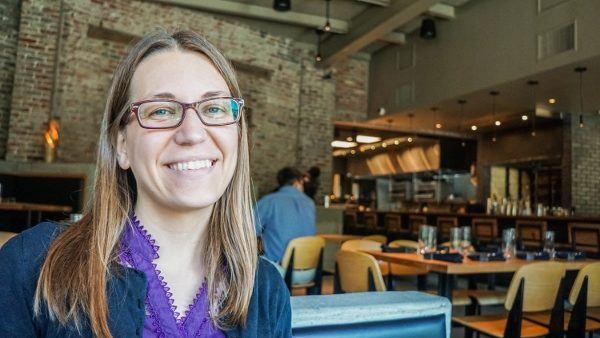 Service was friendly and attentive. Besides the wine mishap and a pretty long wait between our appetizer and entrees, the only other awkward moment came when we were a few bites into our entrees and our server asked if we wanted to put our dessert order in.

We obliged because she said we wouldn't have to wait as long if we did so, even though our dessert choice should have only required assembly upon order. Hopefully these types of issues smooth out after they are open a bit longer.

The Dessert Was The Real Winner 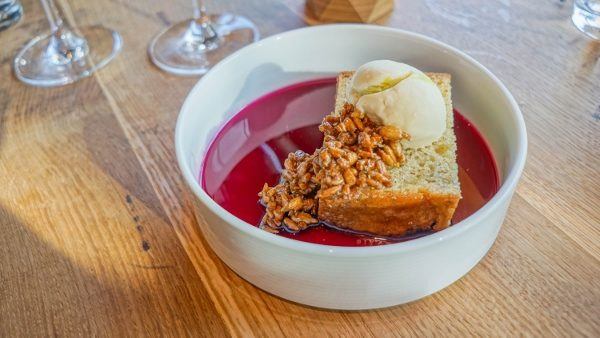 Luckily the dessert was more than worth the awkwardness. We ordered the sourdough pound cake which was an absolutely genius combination of flavors and textures. The cake itself was tender and moist with a hint of tanginess. On top was a vanilla ice cream that slowly melted and soaked into the cake. A sage syrup was also drizzled over top that provided a fresh herbiness.

But the most brilliant components were the elderberry molasses which pooled at the bottom of the bowl, soaking up into the cake with its tart fruitiness, and the sunflower seed brittle which was insanely crunchy and nutty and provided a welcome contrasting texture. 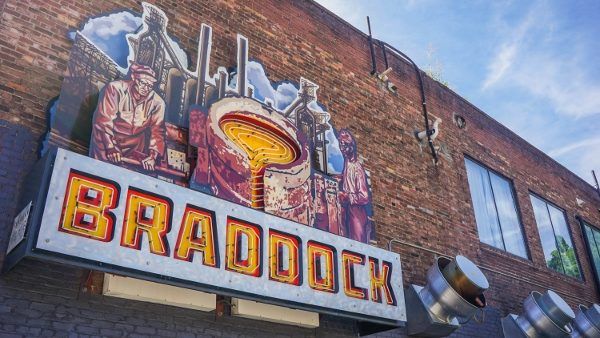 Overall, we thought the price points seemed a bit ambitious for the experience we had and the portion sizes that were served. The octopus and dessert were star dishes, despite being on the smaller end, while the entrees were prepared well but not necessarily swoon-worthy yet. We appreciate what Kevin Sousa is trying to do at Superior Motors; however, and we look forward to seeing how the restaurant matures as time goes by.

Superior Motors was located at 1211 Braddock Avenue in Braddock, PA, and closed permanently in 2021. Advanced reservations are a must.

For more fine dining in Pittsburgh, check out Altius and Monterey Bay Fish Grotto on Mount Washington, Eleven in the Strip District, Helen's at Seven Springs, Spirits and Tales in Oakland, or Casbah in Shadyside!

Are you in local Pittsburgh media (such as a blogger or Instagrammer)? Let’s meet up!
351 shares