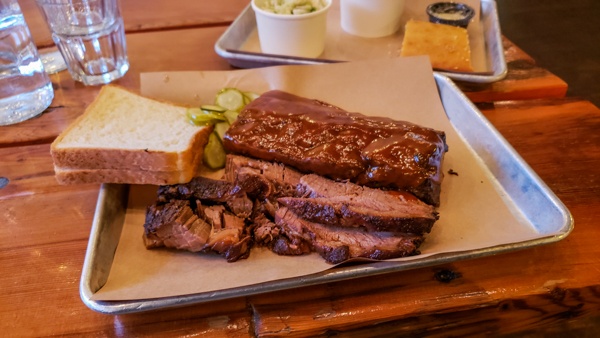 What do you get when you combine the food hall concept found in East Asia with executive chefs and Pittsburgh's Strip District?

The answer is Smallman Galley, and this addition into Pittsburgh's food scene is going to change the way you look at new restaurants.

The reason? This one features not just one chef, but four.

The Concept of Smallman Galley 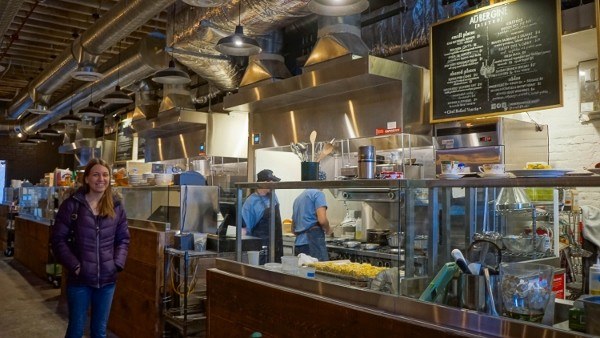 Smallman Galley is a food hall that features four chefs in micro kitchens that are open for all to see. Rather than ordering at your table with the chefs hidden in the back kitchen, at Smallman Galley you go up to each stall, check out the menu, and even talk to the chef who is preparing your food.

These concepts are often on limited duration (from anywhere from a few months to a year or two) and allow chefs to test out new concepts that could potentially work as standalone restaurants. 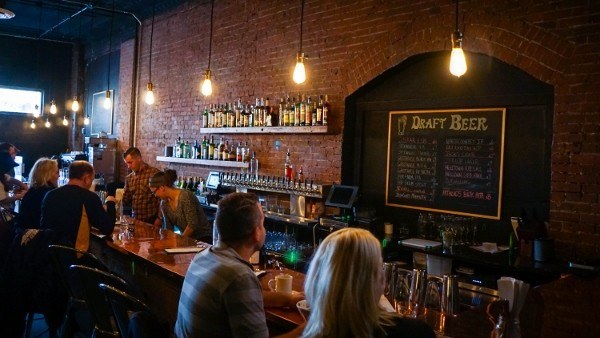 Smallman Galley doesn't end there, as they also feature an incredible bar- with one of the best draft lists for local beer in the city, a coffee corner, and a beautiful restaurant design worthy of the Strip District's rich history.

Naturally, to truly give Smallman Galley a fair shake we had to eat at all four micro restaurants with four large meals and several trips to the restaurant's amazing bar. But rather than separating our reviews out into four articles, we're featuring micro reviews of each here in this not so micro post. 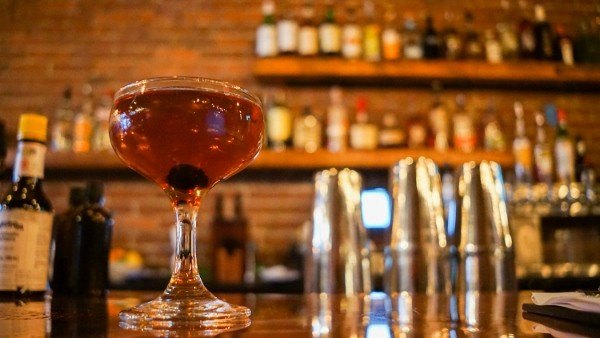 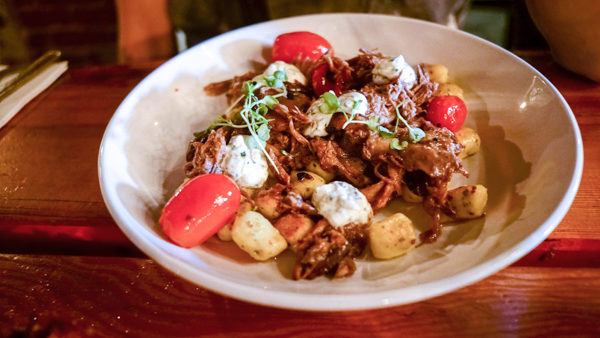 If food could give you a hug, the food at Home would definitely do just that. It's straight up comfort food with a few modern twists thrown in.

The menu has hints of southern influences like the chicken and buttermilk biscuits with pimento cheese grits and pepper jelly, and the fried green tomatoes on top of the pulled pork sandwich.

We opted for the meat and potatoes, which was a saucy short rib ragu that was super tender combined with creamy parmesan gnocchi. Blistered cherry tomatoes provided an acidic counterpoint, and dots of a whipped basil sauce brought the freshness. 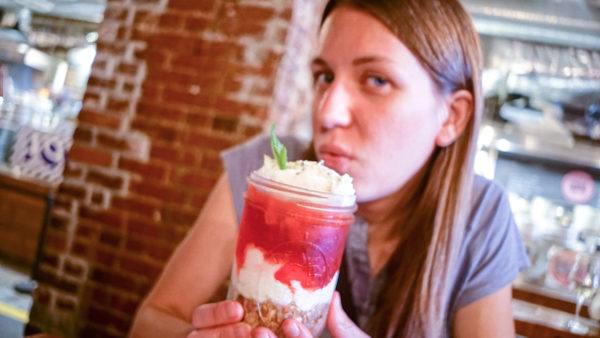 Desserts are served in cannning jars and the flavors change daily – on our visit it was their take on a strawberry pretzel salad with a buttery pretzel crust layer topped with a strawberry jello layer, a cheesecake layer, and whipped cream. This dessert is huge, so definitely share it with others! 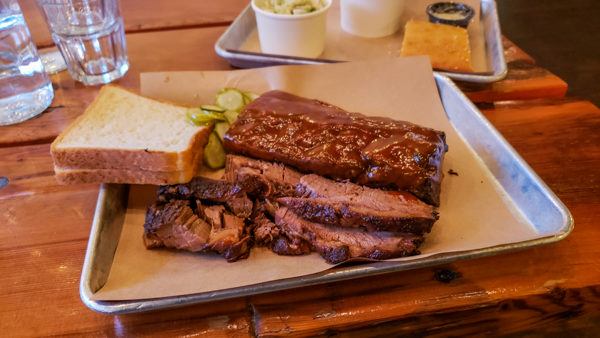 The Smoke Pitt is a barbecue concept that features an array of meat platters and sandwiches that reads mostly like a traditional barbecue joint. Their main feature at opening is their “meat and three” menu- a half-pound of meat and your choice of three sides. Because that is not good enough for our meat cravings, we opted for the upgrade to have two meats plus the sides for a respectable $19.

I went with my normal barbecue choices of ribs and brisket, and felt that, even though the portion was huge for the price, the meat fell flat. There was something just a bit generic about the barbecue overall, and most of the meat outside of the fatty sections of the brisket weren't exceptionally tender as well. Without any appreciable bark or smoke flavor, I really left this one rather disappointed.

Sadly, the sides here weren't much better and the mac and cheese was quite dried out with little cheese flavor and the only redeeming side was the tangy coleslaw. I'll give this one the benefit of the doubt as I did visit the first week of opening, but so far I am not inspired to return to try this one again soon. 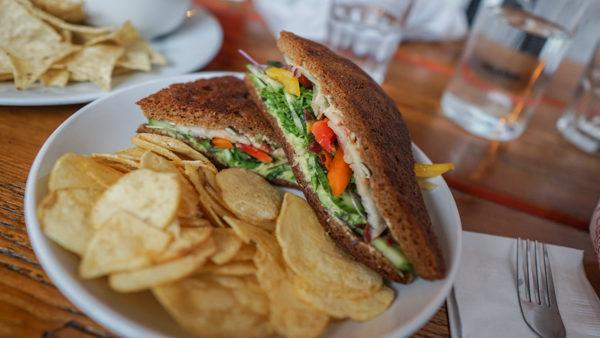 I have to admit that when Liminal was announced (as Steel City Subs), I was not that excited. The menu reads like a fairly conventional sandwich and bowl shop and was not as inspiring as other concepts that have passed through the galley.

During my visit, I opted for the vegetarian Produce Terminal sandwich which was fully loaded with vegetables like arugula, microgreens, sprouts, red pepper, carrots, onion, and more. Going along with it was hummus, apple, cucumber, pumpkin seed, avocado, and olive oil that came together for a really flavorful sandwich with a lot going on (with the cucumber and apple adding a refreshing flavor to counterpoint the vegetables).

We also added on an order of the whipped avocado dip for the table which was a guacamole mixture with a rather creamy texture served with chips and vegetables for dipping. However, apart from the texture the dip was a bit simplistic.

While I would still say that these were somewhat basic iterations of sandwiches and dips respectively, the flavor combination for the vegetarian sandwich worked. I'm not sure if I would order more from this menu when compared to other options at the Galley, but I will be watching to see where it goes from here!

Sultry opened at Smallman Galley in mid-2019 and focuses on an array of Eastern European dishes including schnitzel, pierogies, chicken paprikash, and more.

What we really like about this one is how well executed the dishes are with complex and often hearty flavor profiles. The beef shortrib in the pierogies offers a nice compliment to the potato-filled classics, and the dumplings that accompanied the chicken paprikash have a pillowy texture you really need to try to understand.

Our only one downside for this particular stall is that the price is on the higher end, but that being said for perfectly executed Eastern European fare we can get behind that!

After this recent round of visits, we have to say that Smallman Galley is quickly making its way onto our list of all-around favorite restaurants in Pittsburgh.

An awesome happy hour (half off all drinks), a fantastic local draft beer list, creative and delicious food, lots of variety so that there's something for everyone, and a buzzing atmosphere make this spot one of our go-to's for a fun night out, weekend brunch, or entertaining out of town guests.

It should be yours, too.

Smallman Galley is located at 2016 Smallman Street in the Strip District. Their sister incubator restaurant, Federal Galley, is located in the North Side at 200 Children's Way.

For more restaurants in the Strip District, check out Kaya, Gaucho, and Penn Avenue Fish Company– some of our favorites!

Are you in local Pittsburgh media (such as a blogger or Instagrammer)? Let’s meet up!
Scroll back to top
2505shares