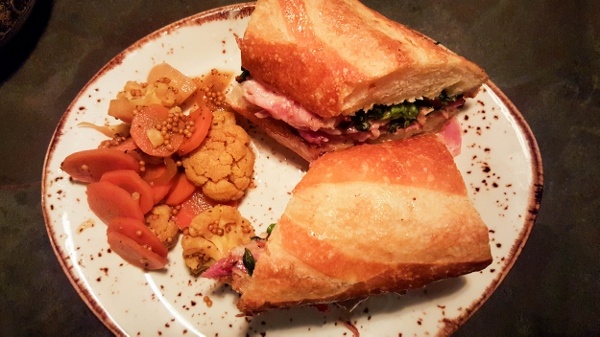 Over the years, we've noticed many positive changes in Pittsburgh's food scene. One of our favorite differences is that downtown Pittsburgh is actually becoming a dining destination in the city. People are not only sticking around to hang out after their work days are over, they are making the trip downtown from other neighborhoods to check out the many new and inventive food and drink options.

We've experienced this first hand as we've gone downtown for the sole purpose of dining several times over the last few months and have been surprised to see so many people downtown on Saturday afternoons and weeknights.

Grit & Grace is part of this new excitement and was our most recent downtown dining experience. 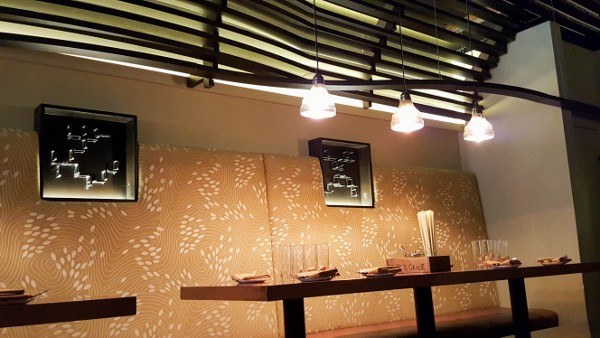 As we stepped into Grit and Grace, we noticed the decor was sleek and modern but also somewhat sterile feeling, almost reminding us of a hotel restaurant. Once we took a look at the menu, however, we realized the restaurant is anything but a typical steak and fish type of place that you'd normally expect at such an establishment.

The menu feels vaguely Asian with dim sum, a banh mi sandwich, and ramen options on the lunch menu. However, interjected among these choices are sandwiches like a BLT, brisket, pastrami, and a burger. The cool thing about these more traditional sounding options, though, is that they have intriguing twists that up the ante like artisan breads and unique sauces.

As we went for lunch we decided to stick with sandwiches and tried the smoked brisket, tempura eggplant, and pork pastrami. The brisket was a fancified reuben with kohlrabi providing the crunch of the traditional sauerkraut and pickled red onions and horseradish cream adding tanginess to keep the sandwich from getting too heavy. The tempura eggplant was also delicious- the eggplant was cooked well with a light tempura coating, and an herb dressing gave a nice freshness. The focaccia it was served on was also pillowy and baked to perfection.

Our Favorite Sandwich: The Pork Pastrami 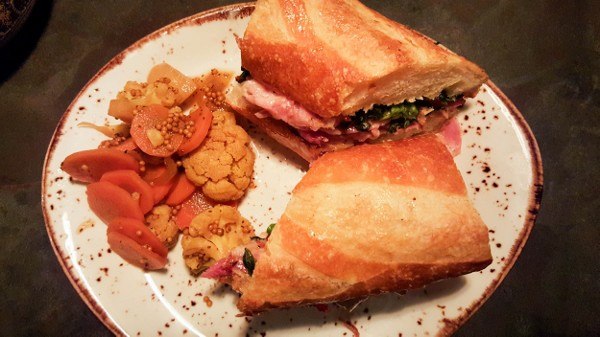 Our favorite sandwich was the pork pastrami. The baguette it came on would make a Parisian smile: crispy on the outside and light and airy on the inside. The pastrami itself had a perfect balance of crispiness and meatiness, and its richness was offset with crunchy sauteed broccoli rabe. The roasted garlic mayo and provolone “cheese whiz” held everything together with a savory creaminess.

All of the sandwiches were served with a side of pickled carrots and cauliflower, dotted with pungent mustard seeds. The acidity and lightness of this side dish was a perfect accompaniment to the meaty sandwiches, and a welcome change of pace from the usual French fries.

Since we opted for the more traditional deli style sandwiches on this visit, we look forward to returning to try some of the Asian-inspired items as well as the ramen and dinner entrees that we missed.

Are you in local Pittsburgh media (such as a blogger or Instagrammer)? Let’s meet up!
69 shares