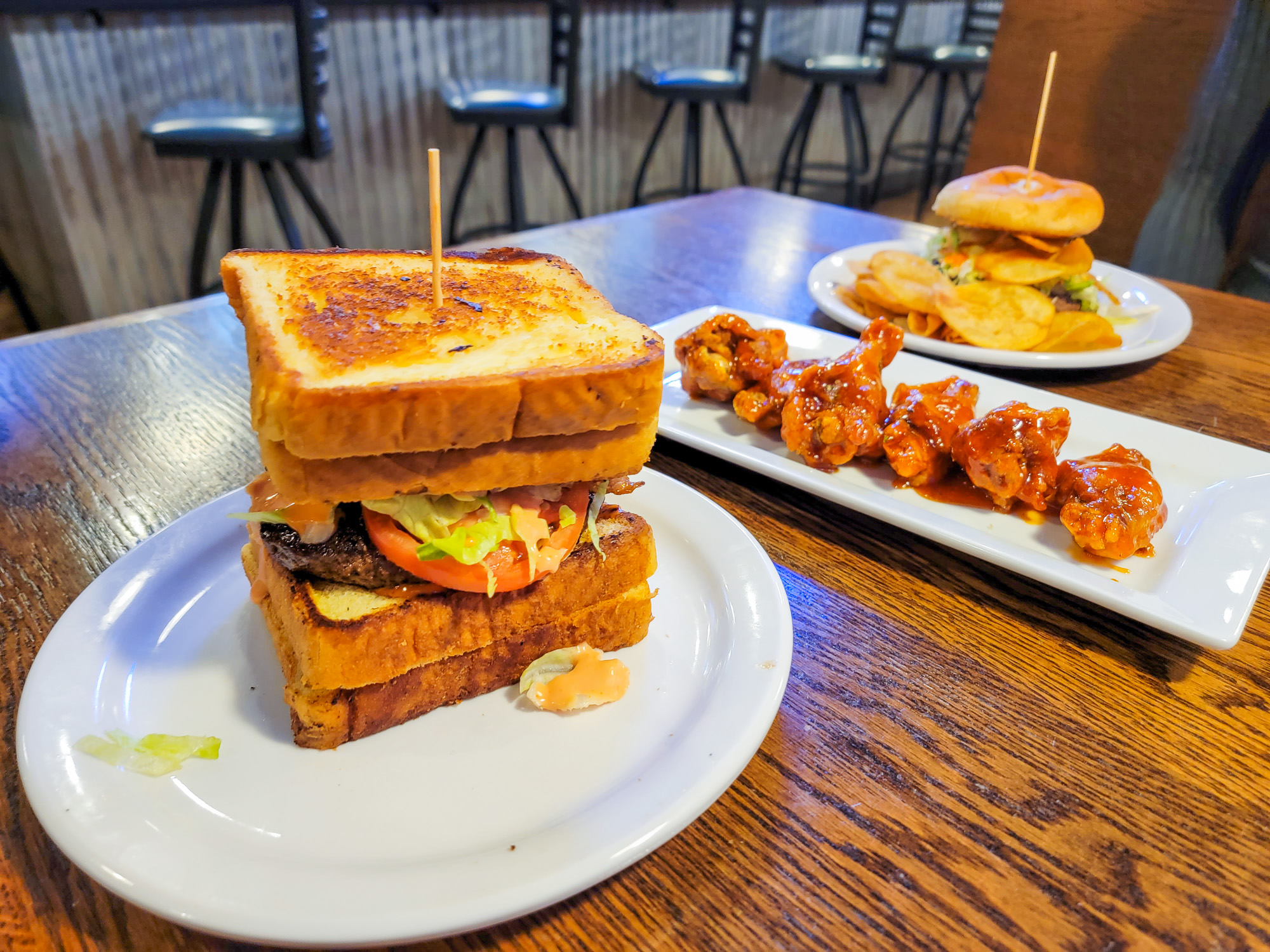 Back to the Foodture has been making waves in the Pittsburgh food scene in recent years thanks to their impressive wing and, shall we say, rather extreme burger menu (amongst countless other reasons).

Sadly, due to many issues on our end, we could never make the logistics work of visiting their South Side eatery.

But when this one announced they were adding on a new location at the former Buford's space in downtown Pittsburgh just next to PPG Paints Arena, we knew we had to visit as soon as possible. As it turns out, we happened to be at PPG Paints for a show on Back to the Foodture's opening week, and made sure to be one of the first ones in the door.

Looking back on it, we regret dragging our feet on visiting this one for as long as we did!

Extreme Burgers and Wings at Back to the Foodture 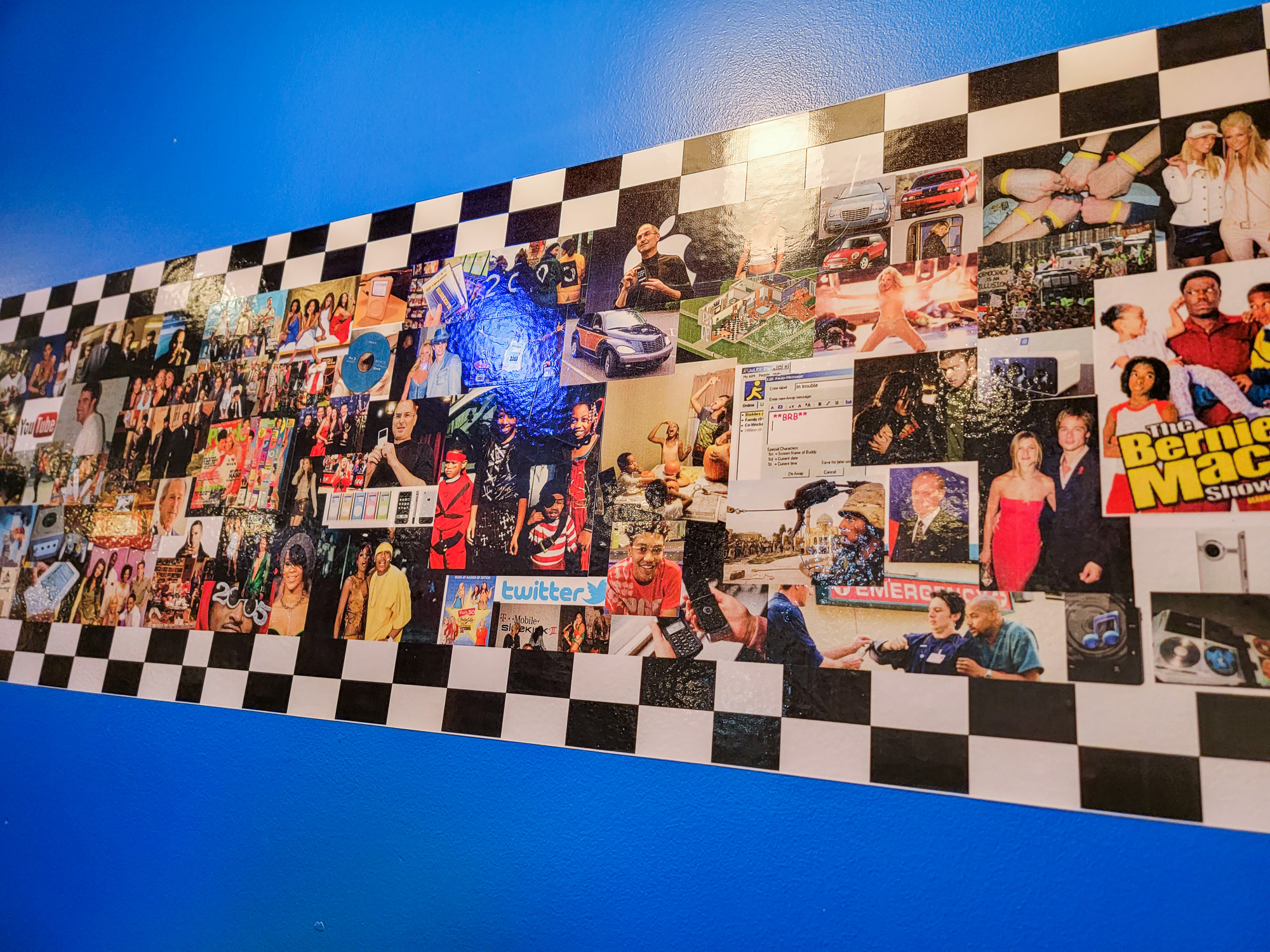 Before talking about the menu at Back to the Foodture, we have to make a quick note about the space itself. The name and logo of this one are heavily inspired by a certain famous movie that we absolutely love, and the ambiance here is an homage to nostalgia for times past as it is the movie and modern, delicious food.

The design elements are seen all over, but perhaps our favorite part is the image showcase along the booths on the back wall. Photos here take you back in time, and nostalgia hit us hard looking through photos from the early 2000s shown above our booth. Yes, even Twitter was launched in 2006, and yes, that was back when people actually used it (you know, the good old days).

When it comes to the food menu, you'll do well to have a plan of attack for this one well before you arrive because it is, in a word, huge.

The menu at Back to the Foodture includes extreme burgers and hot dogs, more conventional burgers and hot dogs, build-your-own options, sandwiches, loaded fries, and a wing menu with over 150 sauces to choose from. Despite having an idea of what we wanted before we arrived, our waitress had to come back a few times as we simply could not decide between the countless options.

Ultimately, we decided on an order of two burgers and wings and ended up with an absolute feast. 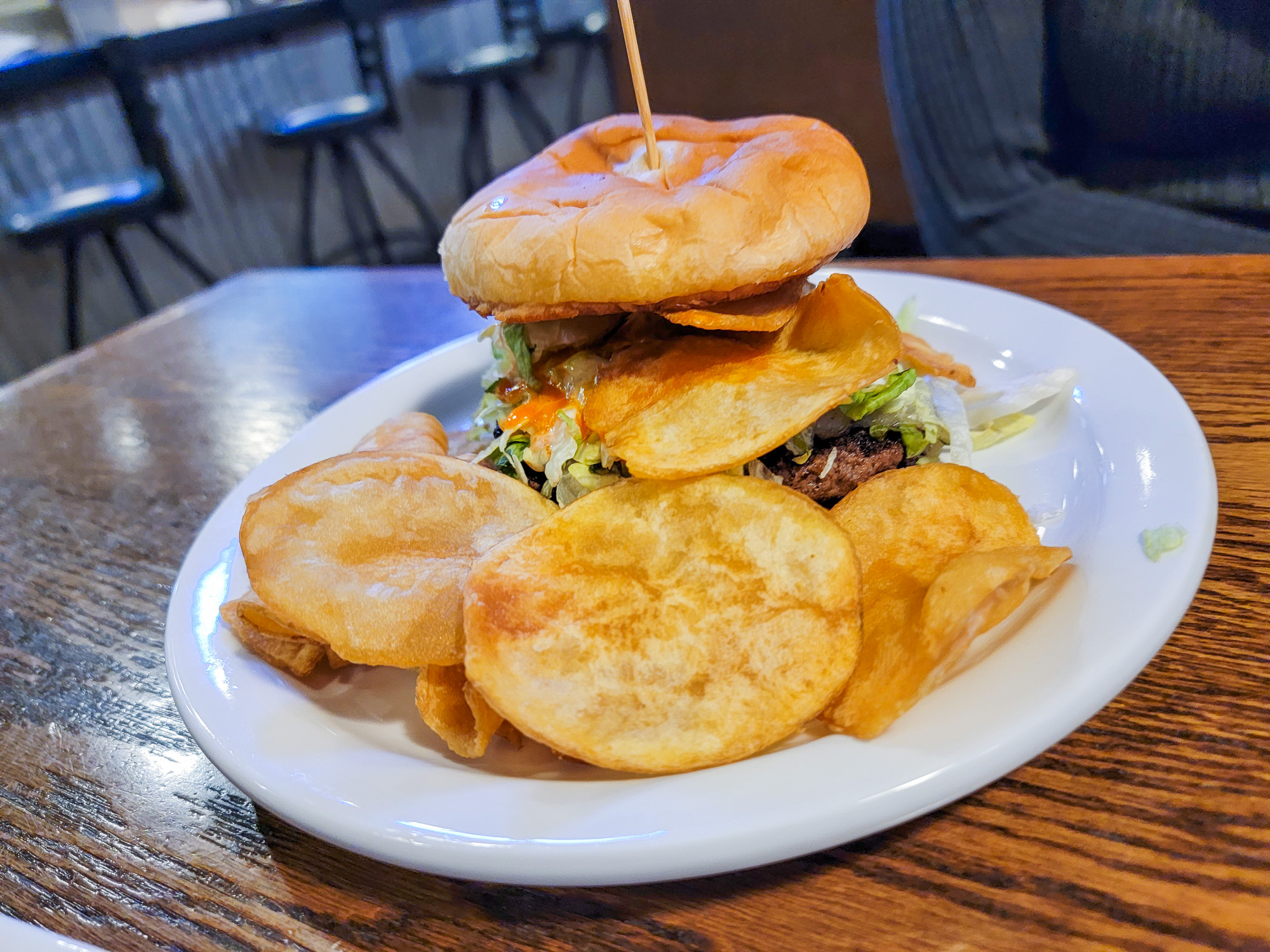 The first burger we ordered was trending to the more traditional side of things, the McFly- a single burger topped with pepper jack, tomato, lettuce, potato chips, and buffalo sauce. This one took us back to our school days when kids would add potato chips to their sandwiches, and offered a nice textural pop onto what you may call a slightly more conventional burger by this restaurant's standards. 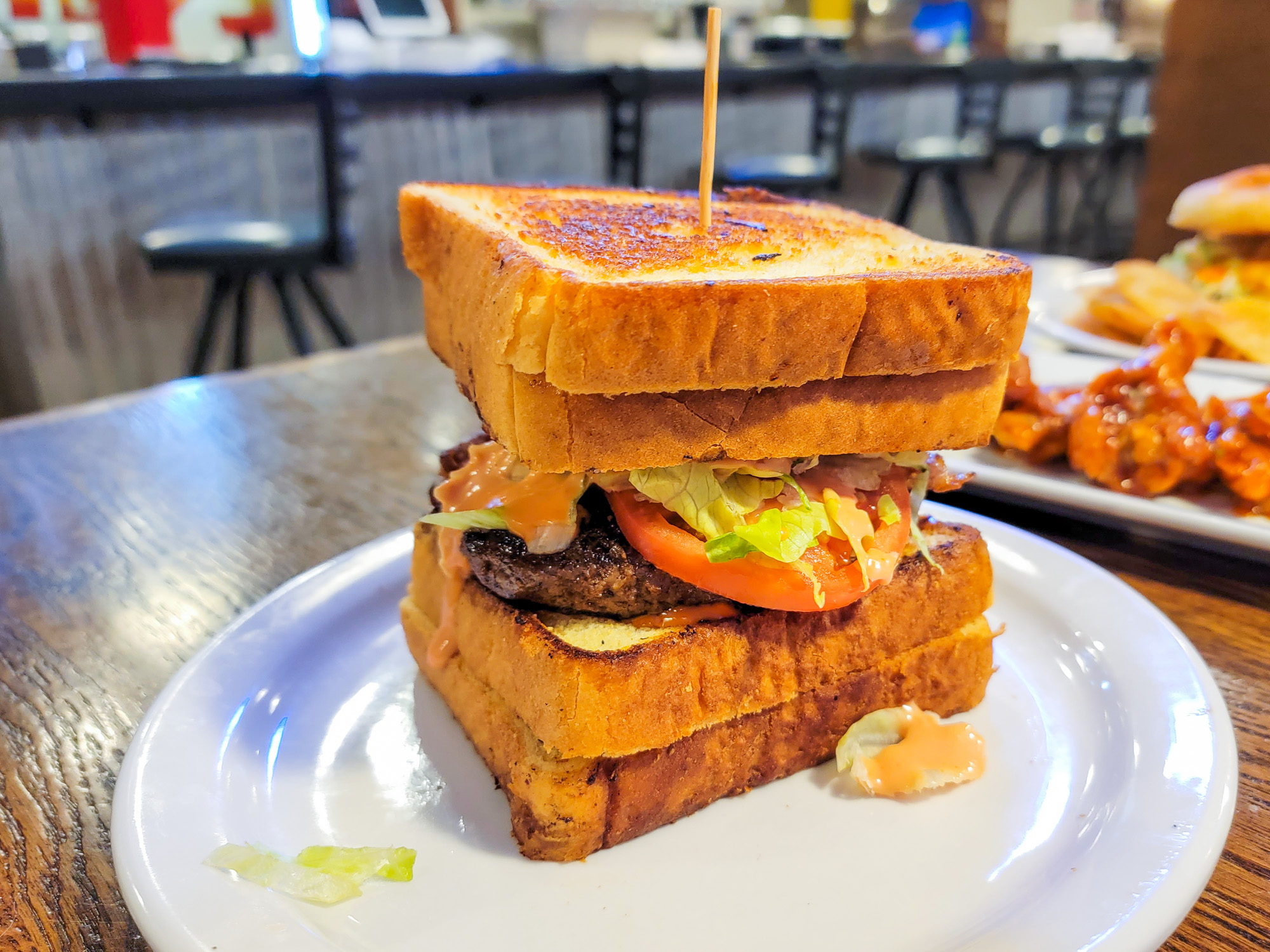 The second burger we ordered was more extreme, the Lil Bug- a single burger that swaps out buns for two grilled cheese sandwiches was topped with an egg, bacon, tomato, lettuce, cheese, and more. You'll note that this one was called little because they also have a large version of this burger which is double meat and toppings with an extra slice of Texas toast in the middle for good measure. This one was oozing with flavor, and despite the metric load of carbs from the grilled cheese, oddly worked.

In fact, our server wished me luck in finishing it (which, I should remind you again, this was still the small one), and was visibly surprised that I had actually done so. What can I say? It was delicious, I was hungry, and I suppose we could not take leftovers home with us as we went to a show at PPG Paints right after, too. Will I ever be hungry enough for the full-sized one? No. Would I split a full-sized one with another person (or two)? Absolutely. Either way, I am pleased with myself for tackling the small one all the same as it satisfied a craving I didn't know I had.

If there was one critique we have about the burgers here, it is simply that we were not asked how we would like them prepared and both our patties came out well done and slightly dry. This was more noticeable in the McFly, as it was more limited in toppings, and we could see how loading up a burger would help offset that ever-so-slightly- the Lil Bug was practically dripping with everything going on it it. But we also recognize this is a personal preference on us all the same. 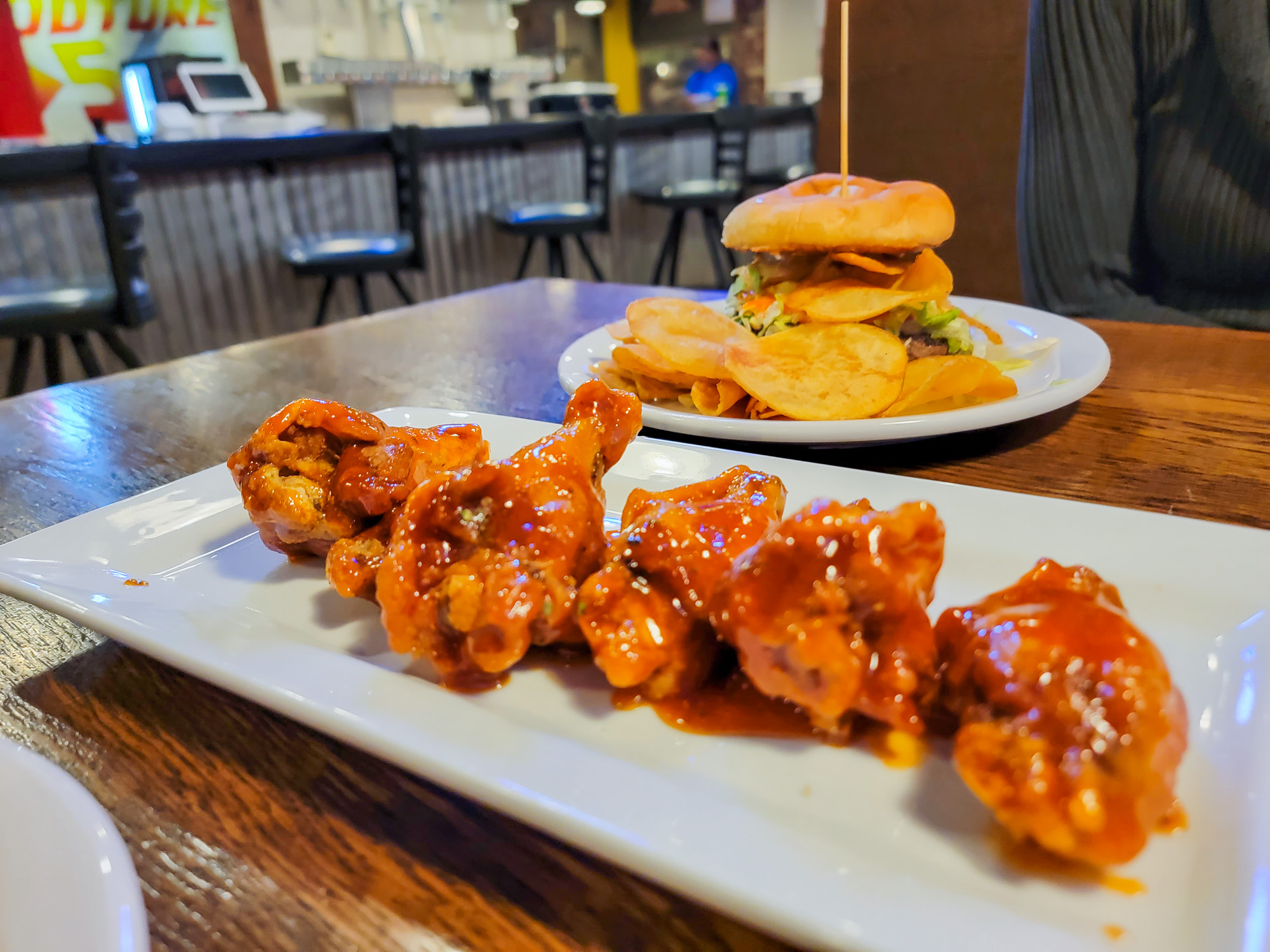 As we are gluttons for punishment, we rounded out our order with an order of six wings with hot honey garlic sauce and have to admit the crispiness of the wings and balance of the sweet/hot/garlic notes in the sauce were perfect. Did we need more food next to those huge burgers? Not in the slightest. But we must admit we are glad we got wings instead of fries all the same- we'd order these (and more) in a heartbeat. In fact, I would likely return to Back to the Foodture just to order a monster spread of wings on its own.

Despite the size of our meal, one particular element was quite small- the bill. For the amount of food, we got we were pleasantly surprised with our overall bill. While this one was a bit more than conventional takeout, for a sit-down restaurant in a monster space right next to the stadium, we simply don't know how they can do it. More food for less? We can't say no there!

Ultimately, our only real regret from Back to the Foodture was that the menu is so large that we would need at least five visits to do it justice. One single visit is simply just a taste. But perhaps, more importantly, is that after eating here we want to visit this one at least five times to do it justice, and that is a very important distinction to us. From a burger that swaps buns for donuts to another with honey buns and ~150 more wing flavors, we really have our work cut out for us here in future visits.

While we cannot do the loaded food here as often as we would like, because let's be honest it was a calorie bomb all around, when the mood strikes us we know where we will be- Back to the Foodture!

Back to the Foodture has locations on 2667 E. Carson Street in South Side and on 1014 Fifth Avenue in downtown Pittsburgh just across from PPG Paints Arena. We visited the downtown location for this review. 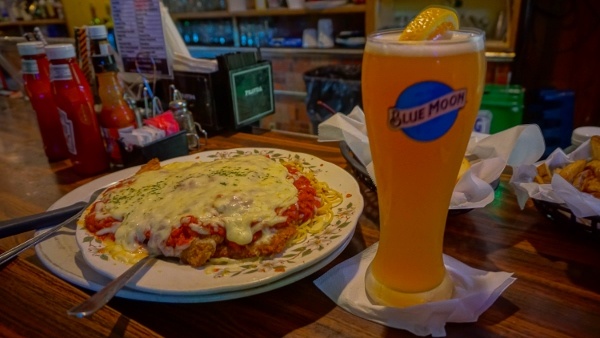 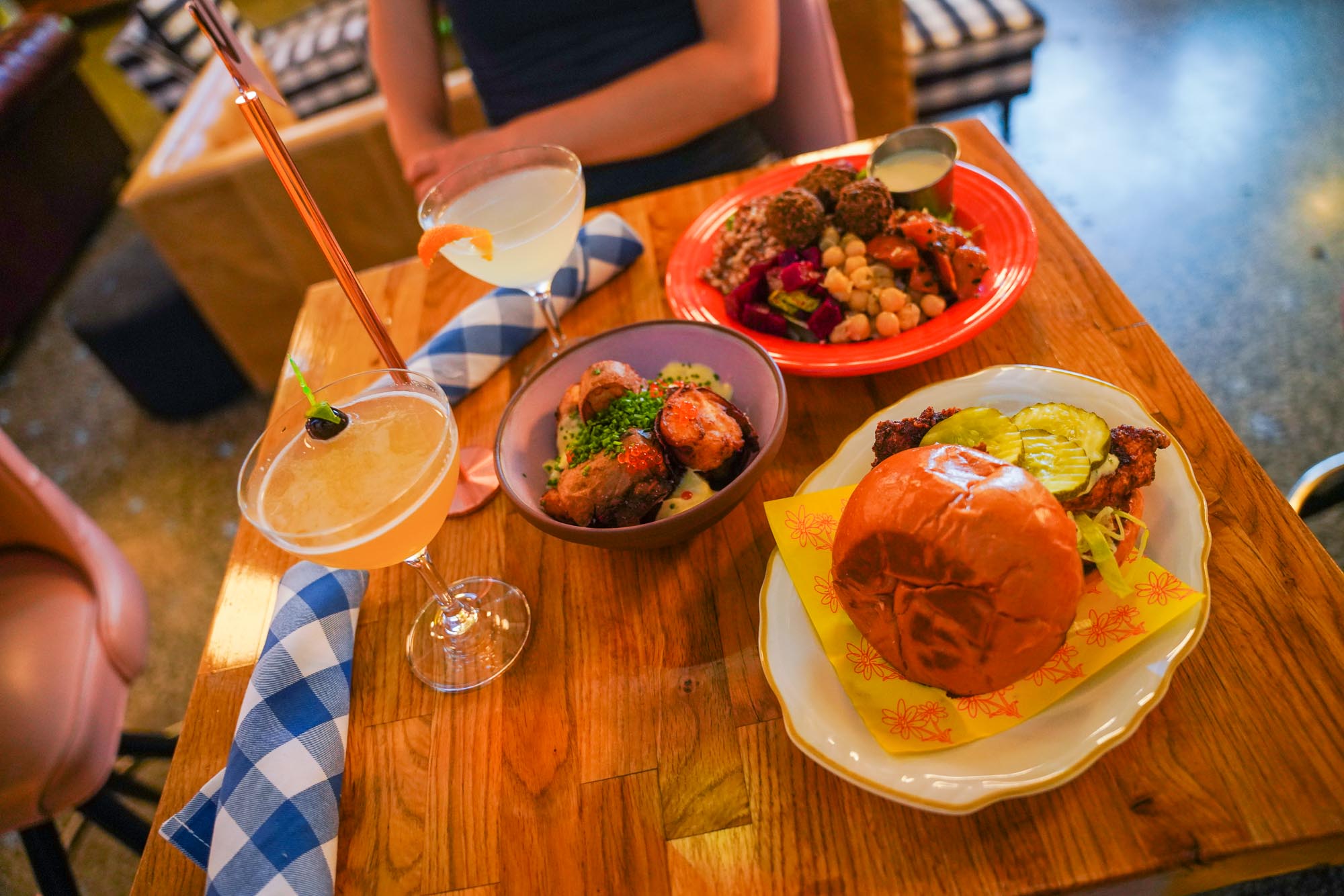 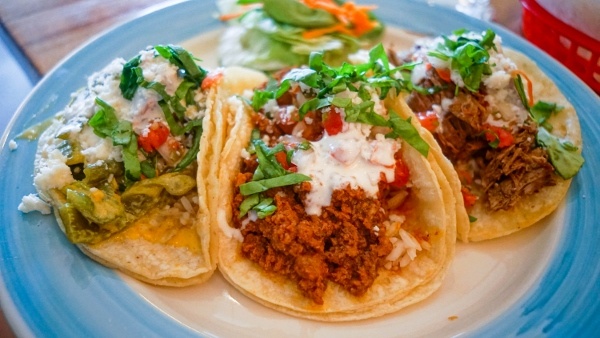 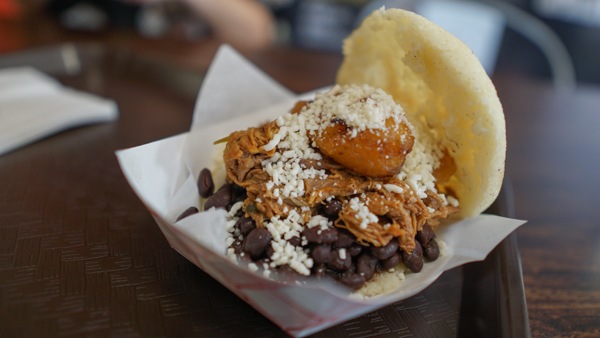 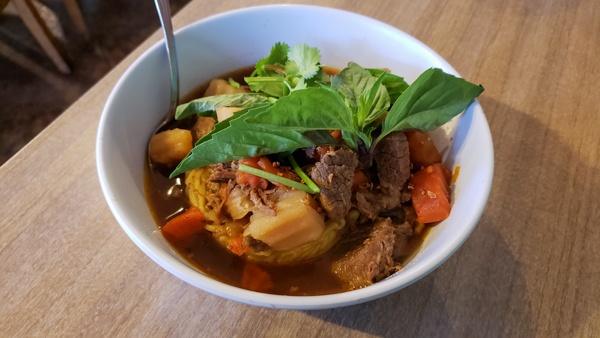 Are you in local Pittsburgh media (such as a blogger or Instagrammer)? Let’s meet up!
142 shares